• Robert Powell was the man that penciled the conceptual design.

• The 1 Series and i3 is BMW's smallest new offerings currently on sale in South Africa.

'So close, yet so far' is the phrase that can best describe BMW's plan to put their Z13 concept into production.

The '90s was a defining period for many automakers, with many introducing models that spawn current generations and even achieved icon status in the process.

The Bavarian-based brand is the kings of their own castle, having recently launched their range of M3 and M4 performance models - not forgetting them lending Toyota a hand in the mechanical components of the latest Supra.

They're not a brand that follows the small car blueprint, with their X-SUV range particularly a testament to that. Tipping scales on the other side of the coin, the 1 Series and i3 is their smallest offerings currently on sale in South Africa.

The start of something

According to Car Throttle, the first prototype used a 1.1-litre four-cylinder engine sourced from a K1100 motorbike that produced 61kW. It weighed a low 830kg with power sent to the rear wheels through a Ford-sourced CVT transmission. What made it different was its unique central seating position - a trait it shared with the recently-launched McLaren F1 at the time.

Initially sketched by designer Robert Powell, BMW debuted the Z13 at the 1993 Geneva Motor Show and it was well received from the public, leading to the German brand commissioning Powell to design a second prototype. 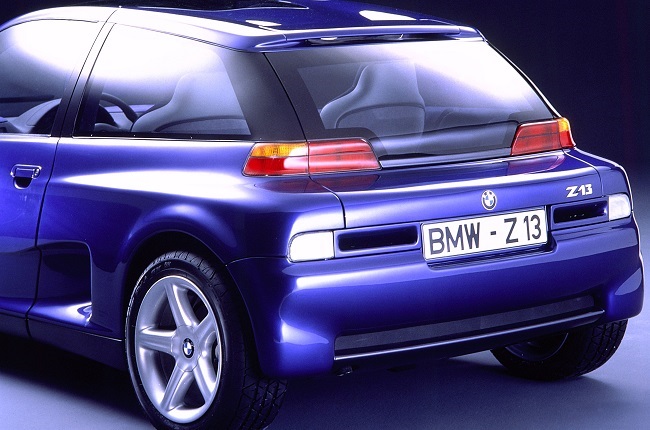 This time the 1.1-litre was chucked in favour of a bigger 1.2-litre used in the K1200 motorbike. Gone also was the CVT, and in came a five-speed manual transmission.

The general consensus is that if people show enough interest in a particular model during the concept phase, it will be put into production more often than not.

In 1994, Rover Group was acquired by BMW, which also happened to own the rights to Mini Cooper. As a side note, BMW only introduced the 1 Series in 2004, so before then, the brand never had a compact offering in the stable. With the availability of the Mini, plans for the Z13 slowly fell away because there was now no need to funnel resources into a car that already had a model in production.

Living through the i3

According to Motor1, the concept had a generous array of tech just like the i3 today, such as an electric parking brake, satellite navigation, telephone, and even a fax machine.

Judging by the electrification of the i3, the concept would have followed along the same lines because it made sense that a small car had a small yet capable source of power and in today's age, what better way to do it than with an electric powertrain.

Both the i3 and Z13 was constructed using carbon fibre body's that was able to accommodate either a small combustion engine or one of the electric variety. BMW would probably never greenlighted the idea of a central seating position in a compact city car even if it was beneficial to overall driving dynamics.

Though not directly compatible with the Z13, the Z4 and Z4 M40i shares the same model series but serves as BMW's out-and-out roadster options available in SA with pricing starting from R887 100.

In 2013, BMW launched its electric i3, and in a light-hearted way, they paid homage to the forgotten Z13 compact city car that would have been. Other premium brands like Audi and Mercedes-Benz also had smaller A1 and A-Class offerings, which continues to be sold as evolved models in SA.

The truth is that the Z13 concept was a hit among the wider motoring community, and had it not been for the British brand takeover, it would have seen production.

It might not look the same at a glance but seeing as both use carbon body's and measure up with near identical lengths are a few indications of borrowed DNA.

Would it have been available in South Africa? No one could've known for sure but judging by how many models they currently have on offer here, there is a good possibility.

We live in a world where facts and fiction get blurred
In times of uncertainty you need journalism you can trust. For only R75 per month, you have access to a world of in-depth analyses, investigative journalism, top opinions and a range of features. Journalism strengthens democracy. Invest in the future today.
Subscribe to News24
Next on Wheels24
Toyota SA adds to Kentucky Rounder winner's prize with impressive mechanical backing

How a fouled spark plug can cause stuttering fibrillations and tribulations in a...