The history of the Golf GTI – fascination in just three letters

• The eighth-generation Golf GTI arrives in the second quarter of 2021.

• GTI stands for Grand Tourer Injection. Volkswagen were intially going to build 5000 MkI GTIs, but that turned into over 460 000.

• The GTI is considered to have founded the sporty hatch segment.

Very few cars garner as much hype as the Golf GTI. Volkswagen's first performance hatch is bearing the famous three-lettered badge, which means 'Grand Tourer Injection'. A year before the GTI making its world premiere at the 1975 Frankfurt motor show, six VW employees, in secret, worked on a sportier Golf.

That March, the group with the help board member Hermann Hablitzel, officially presented the Sport Golf project to chairman Toni Schmücker. Now the race was on. Could they get the car ready by September? First, the correct motor was needed, that came in the form of an injection engine with 80kW.

According to Volkswagen, the team decided on GTI after considering TS and GTS names, while chief designer Herbert Schäfer – a keen golfer – reinvented the gear knob by merely attaching a golf ball to the GTI's gear shifter.

The GTI premiered at the IAA in Frankfurt with its distinctive look with a red edge around the radiator grille, tartan sports seats, the golf ball gear knob and a sports steering wheel. It boasted a top speed of 182km/h. But what Hablitzel, Schmücker and co never anticipated was the GTI's success; initially, only 5000 models were built to cover the costs of production and development.

The final production count was 461 690 units, 92 times more than was more planned initially. Since then, seven generations have followed in the tyre tracks of the original. There have been some hits and misses along the way too. 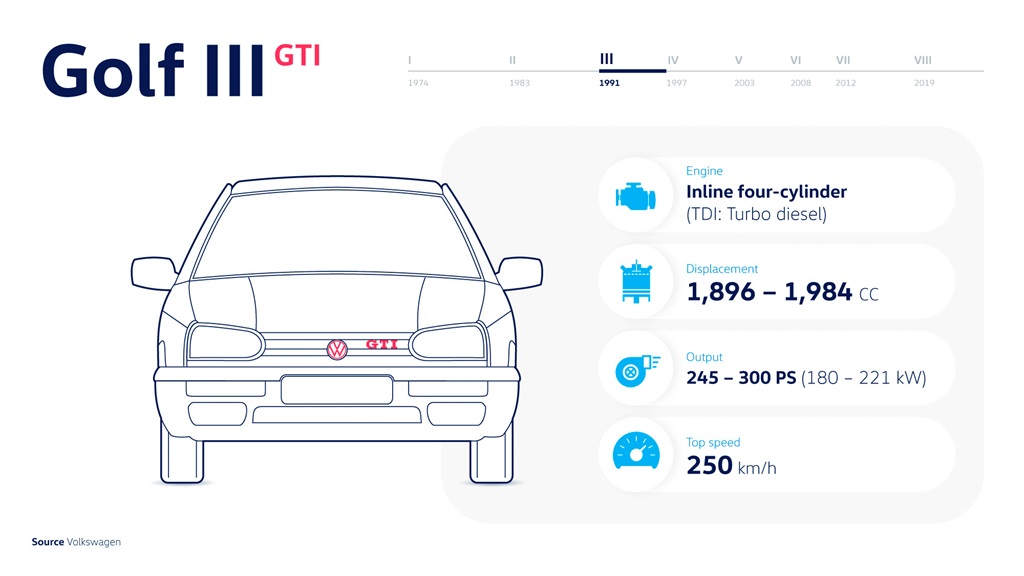 The second (1984) and third (1991) generation models produced more power than the original but lacked its finesse in design; that’s my opinion.

The fourth-generation arrived in 1998 and again missed the mark in terms of a fresh and clean-cut design. However, it was the first GTI to use a petrol turbocharged engine. When I was in my late teens, a friend of mine had a MkIV GTI. He let me drive it once, and I was impressed.

It was the first performance car I'd ever driven, and nothing to compare it to. Then came along the MkV, a car that’s labelled as the comeback GTI after three generations of staid iterations. When it was launched in 2004, many remarked of the MkV’s similarity to the original. It looked good, was fast and practical.

The fifth-generation seemed to reignite the passion for GTI lovers. It boasted a 2.0-litre turbocharged engine with 147kW and 240Nm and ran to 100km/h in 7.2 seconds with a six-speed manual gearbox fitted. A dual-clutch 'box was used for the first time, and that reduced the 0-100km/h sprint time to 6.9 seconds, a top speed of 235km/h was decent for that time too.

The GTI has always felt like a performance car for the 'people'. A car that was at home outside at the 12 Apostles as well as Wembley Roadhouse.

It's a car that transcends class, age or gender. GTI drivers admire and swoon over other owners' cars that are immaculate, and whose love and passion for the icon is tangible.

The following two generations didn’t change the recipe, offering subtle changes that made the GTI even better to drive. Upgrades to the interior made it more technology-heavy and sophisticated.

My second experience in a GTI was a special moment, I drove an Edition 35 model that was part of the sixth generation's life cycle. It was a limited edition model festooned with badges and unique styling changes to celebrate the GTI's 35th birthday.

It felt taut, loud and swift as I drove it home from the airport after attending a rally. I even drove the rare MKVI cabriolet, that proved to be rather special too and caused a stir wherever I drove, such is the buzz around the GTI.

In 2016, the GTI celebrated its 40th birthday. A big one in life. But the essence of the GTI remains, albeit in a sharper, more expensive suit.

It's the outgoing, MKVII that I've driven the most of all the generations and therefore my experience with the GTI is swayed by that of pop and bangs from the 160kW, that somehow always felt like more.

It's a car I woke up every morning wanting to drive, a car I'd happily spend my own money on. And I understand why many have, and will continue to do so.

We live in a world where facts and fiction get blurred
In times of uncertainty you need journalism you can trust. For only R75 per month, you have access to a world of in-depth analyses, investigative journalism, top opinions and a range of features. Journalism strengthens democracy. Invest in the future today.
Subscribe to News24
Related Links
What we can expect from Volkswagen in 2021
The most anticipated car of 2021 is...
Next on Wheels24
'It's become a part of who I am': How a hobby turned into a Hot Wheels collector's passion