• The latest Toyota Supra has been highly anticipated but since launch, there's been a mixed bag of feelings
• South Africans love performance cars as much as they do SUVs.
• We rate four rivals which could give the Supra a run for its money.
• For more motoring stories, go to Wheels24.

South Africa has been starved of some of the most desirable performance vehicles over the years. Everything from the Skyline GT-R to the BMW E30 M3 was forbidden on local shores.

Fortunately, the tide has shifted drastically over the last ten years where petrolheads can freely and officially purchase performance cars they could never have in the past. One of them is the Toyota Supra.

Launched globally in 1978, the Supra went from a first-generation 92kW daily runabout to a fourth-generation 206kW performance superstar. That model and its famous 2JZ-GTE engine would prove to be the last Supra made until the new fifth-generation made its long-awaited comeback only two years ago. Do you think the Supra should have stayed true to its Japanese roots? Please email us here or use the comments section below.

Petrolheads and Toyota purists alike were to get the shock of their lives when it was announced the legendary Supra would be powered by a BMW engine, more specifically, from a Z4.

The single twin-scroll turbocharged 3.0-litre straight-six engine makes 250kW and 500Nm, a significant bump in power over its predecessor.

Looking at the grander scheme of things and the current performance cars currently on the market, 250kW is not much. In the late 2000s, cars were already making close to 180kW, and a couple of decades later, some hatchbacks boast ridiculous amounts of power – many of which eclipses the new Supra on paper.

SEE | These are the most powerful hatchbacks on sale in SA

While all the Supra's power is sent to the rear-wheels, many hot hatches come factory-equipped with four-wheel-drive systems, almost nullifying the possibility of wheelspin which is vital in a straight-line sprint.

Although it would be fascinating to see the results, here are a few AWD-equipped hot hatches that could give the Supra a real run for its money: 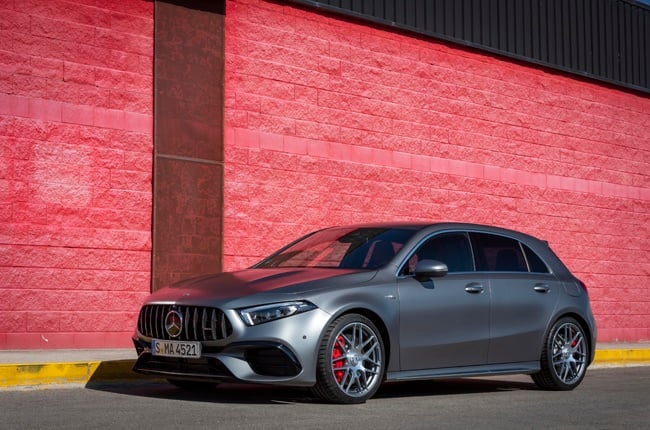 It once was a Smart car lookalike, but dare say that to its face now. Mercedes-Benz completely overhauled the timid A-Class and turned it into supercar beater material.

Packing a turbocharged 2.0-litre engine, power comes in at a ridiculous 280kW and 475Nm while also equipped with the brand's 4MATIC all-wheel-drive system. That is a whole 30kW gap over the Supra. Just like Volkswagen has the R and Audi the RS, Ford has its very own high-performance division.

In its entirety, the Focus is not sold in South Africa anymore, but it is worth remembering the staggering power it produced.

It featured an upgraded version of the turbocharged 2.5-litre engine found in the ST and churned out mighty impressive figures of 257kW and 460Nm, equipped with an all-wheel-drive system. If benchmarks were to be set, then the RS3 put it out of reach for everyone. It is the strongest hatchback on this list by some distance, and when you look at the figures, you can see why.

The performance hatch is powered by a turbocharged five-cylinder engine that pushes out 294kW and 480Nm, all while sending power to all four wheels via it's Quattro all-wheel-drive system. Although rather unconventional for this list, the Kia Stinger GT is a relative newcomer and boasts all the necessary traits to give the Supra a hiding over the 400m.

Under the bonnet is a twin-turbocharged 3.3-litre V6 engine that results in eye-watering power figures of 272kW and 510Nm.

Simply because of it's sheer power also being Kia's fastest performance car in a long time gets itself a nod on this 'Supra killer' list.
We live in a world where facts and fiction get blurred
In times of uncertainty you need journalism you can trust. For only R75 per month, you have access to a world of in-depth analyses, investigative journalism, top opinions and a range of features. Journalism strengthens democracy. Invest in the future today.
Subscribe to News24
Next on Wheels24
WATCH | This insane 2JZ-fitted GR Yaris takes tuning to another level