• The Mini GP and Toyota GR Yaris line up for a drag race of epic proportions.

• The Mini is a track toy that features a BMW-sourced engine with 225kW and 450Nm.

Shoo, it's been a while since we published a drag race, but if there are two cars we'd love to see lined up and ready to go, it's these two: Mini GP and the Toyota GR Yaris.

Both models are the flagship derivatives in their respected model ranges. The Mini is powered by a 2.0-litre BMW-sourced engine with 225kW and 450Nm. It has a 0-100km/h time of 5.2 seconds and is limited to 3000 models worldwide and is proper two-seater as it features no rear bench.

The GP uses an eight-speed sports automatic gearbox to channel power to the front wheels that model-specific high performance tyres. It has a claimed top speed of 265km/h and weighs 1255 kilograms.

The GP underwent testing at the Nurburgring test track and achieved a lap time of less than eight minutes around the 21-km circuit. Mini said its time was 30 seconds faster than the predecessor.

The GR Yaris is a car causing much fanfare in the car world. The little Toyota is an homologation special built for the the Japanese carmaker's World Rally Championship 2021 season. 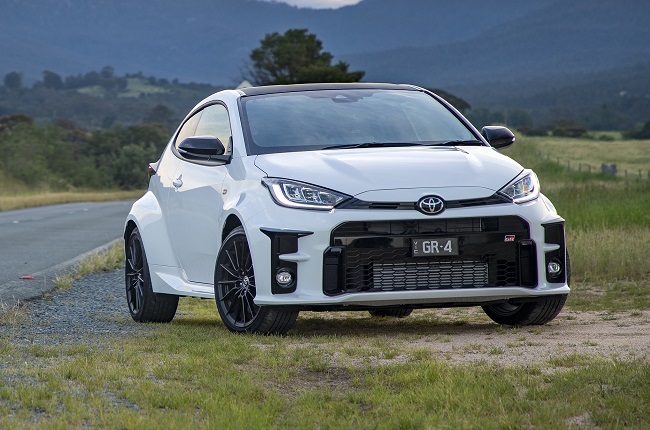 It features bespoke, suspension, damping and shocks and power comes from the same engine used in the rally car. The 1.6-litre turbocharged engine is good for 200kW, but in this video a European model 'only' makes 192kW and 396Nm.

The little bugger weighs just 1280kg despite being four-wheel drive. Toyota reckons it'll reach 100km/h from standstill in 5.5 seconds and tap out at 230km/h.

Because it sends power to all four wheels, the GR will have the advantage off the line in terms of traction. In fact the GR's rear is actually from the bigger Corolla.

The Mini has a price tag of just under R810 000 and only 38 units are available in South Africa. This makes it the most expensive model in the Mini range, but also the most exclusive.

Toyota confirmed the GR Yaris will come to South Africa later this year, but pricing has not been established. It's definitely one of the most anticipated cars of 2021, and is arguably one of the most exciting cars to come from Toyota.

The video from the guys at CarWow below shows these two mega performance hatches battle it out in a drag race as well as a braking test and several rolling start races.

We live in a world where facts and fiction get blurred
In times of uncertainty you need journalism you can trust. For only R75 per month, you have access to a world of in-depth analyses, investigative journalism, top opinions and a range of features. Journalism strengthens democracy. Invest in the future today.
Subscribe to News24
Related Links
WATCH | Teutonic drag race battle: Audi S3 v BMW M135i v Mercedes-AMG A35
Drag race | Porsche 911 Turbo S vs Ferrari 488 Pista vs Lamborghini Huracán Performante
Next on Wheels24
RoadTrip | Chasing the West Coast breeze in Suzuki's new Vitara Brezza