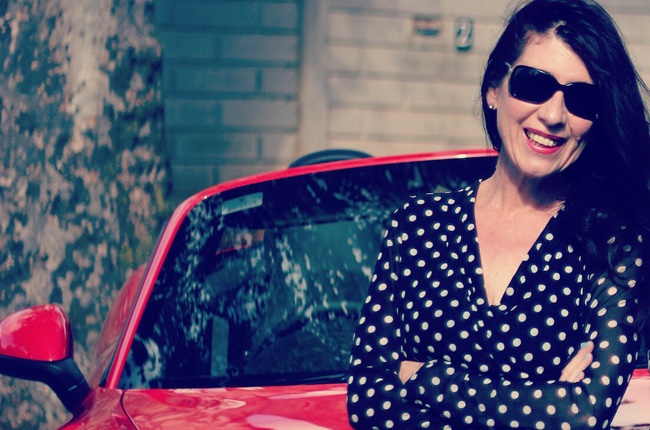 • Melinda Ferguson is not only a motoring journalist, but a successful publisher too.

• 20 years ago, she was addicted to crack and heroin.

• She turned her life around after hitting rock bottom. Hard.

We grab our coffees and make our way to one of the empty tables outside the restaurant. "What about here?" I ask Melinda and point. "Yes, this is perfect, darling," she says before putting her coffee down and fiddling in her bag for a smoke.

"Our government doesn't have a fucking idea of how they're punishing us by prohibiting the sale of tobacco," she says and lights her organic tobacco, inhaling the plumes and slowly releasing it. Melinda is a rehabilitated drug addict and has been clean for the last 20 years. But just because her resume says two decades, doesn't mean that it was an easy road.

The conversation is going well, but I know that at some point I'd have to ask her what life was like for Melinda Ferguson before turning her life around. She knew why we are here, and I am starting to realise that she had put the part of her life behind her. Then, before I could formulate a right way of asking, it slipped out: "What was your life like 20 years ago?"

Before she became the wonderful, inspiring person sitting in front of me, Melinda was addicted to crack and heroin. She trawled the streets of Hillbrow, scouring for her next fix. It didn't matter how she got it, as long as she could appease the cry inside of her.

"I was skinny, addicted, and totally alone," Melinda says, recalling the inexplicable acts done to her by drug dealers, just so that she could get a fix. After that, she fell deeper into the dark pit she found herself in, and reached to more drugs to still the pain. The addiction destroyed personal relationships, resulting in her then-marriage falling apart, and being estranged from her two sons. "I was broken, desperate and completely hellbent on ending my existence," she says and inhales another puff.

READ: Women in Wheels | How an amphibious wheelchair got this little 'mermaid' in the ocean

Melinda moves the sunglasses over her eyes, resting it on her head. She leans in slightly, as if to share a deep secret: "I was an addict mother, which was such a shameful thing." Of all the hurt she's caused to the people, the most hurtful was what she had done to her sons. Back then, they were two and six-months-old, respectively. Perhaps too young to have known what was happening with their mother, but children, nonetheless, who did not have to be exposed to her lifestyle.

Melinda's mother-in-law took them in, but "instead of waking up and getting clean, I got much worse. I was unable to stop using, and that's how I landed up on the streets. Even though I was an addict, I really did love my boys, but I was unable to escape the grip that heroin had over me."

Six months after losing her sons, Melinda got clean. It was a slow process to rebuild not only relationships and trust, but also her confidence to face the world, and her family.

We attract the waiter's attention and ask for another round of coffee. Never in a million years could I have imagined that I'd be in for such a wild ride. My guest is not holding back; she describes the intricate details of the damning effects drugs have on your body. And how, when you eventually manage to get clean, it's one of the hardest things to find a decent job.

Melinda studied drama at the University of Cape Town and was a filmmaker before her life took a turn for the worst. After her dark days, getting back into her industry was difficult, which pushed her to take up waitressing. "After I got clean, I was very lost and unemployable. I landed up waitressing at a fish restaurant in Melville, Joburg," she says, but could never have imagined what was about to follow.

On one specific day, Melinda served sushi to the deputy editor of True Love Magazine. They began talking, and the woman suggested that she writes her story for the publication. Her story was shortlisted for a Monde Magazine Award, which was followed by an opportunity to freelance for True Love Magazine, and others like Marie Claire. A year later, True Love offered her a position as a copy editor, followed by a promotion to journalist, then senior writer, and a couple of years later the features editor.

And motoring? "In 2009, I was invited to the Tokyo Motor Show, which was a total mindfuck. And on returning to SA, I became the motoring editor of the magazine! Writing about cars has become a huge part of my life since then."

Not just a journalist

A lot has happened in the 20 years since going clean for Melinda, and professionally she has carved out her name in the annals of South Africa's media industry. A few years ago, Melinda founded her publishing title, called Melinda Ferguson Books. In addition, she is a successful writer, hosts writing workshops, and publishes several clients' books a year.

How does one even manage such a hectic schedule?

"I am a total nerd when it comes to making lists and ticking off my daily tasks, which are many," she says. "I find the busier I am, the more time I have. And work energises me. Plus, I am a short sleeper - between 4-5 hours a night - and I do my best work around 4am."

Melinda says that writing has helped her overcome her own demons. From her first book, 'Smacked: A Harrowing True Story of Addiction and Survival', to 'Crashed: How thrashing a Ferrari saved my life', Melinda knows first-hand how writing about your ordeals can help with the pain.

I am still gobsmacked at what Melinda had just told me. It's somehow difficult to fathom that someone can go from junkie to a successful publisher. From down and out to being headhunted by NB Publishers because they want to be associated with you and your brand.

Melinda says that while on a farm for the homeless in the Magaliesberg, there was a moment when things became clear. She had her epiphany that where her life was headed, she would not come back from. It was there that she decided never to take one single day for granted anymore and embrace the opportunities that would come her way.

"I allowed myself to start again," Melinda says, quoting a TS Eliot poem: "'What we call the beginning is often the end. The end is where we start from.' Later on in my recovery, I had those lines tattooed on my forearm to remind me that we all have the capacity to change."

"Thank you, darling," Melinda says as we finish up our chat. She puts on her sunglasses again and lights up another smoke. "You know what, we should all learn not to let the opinions of others get us down. We must explore what makes us special. I always say that we must honour our dreams and believe that we are special, and unique. Don't let peer pressure take you to dark places. Stand firm, and love yourselves."

We say our goodbyes and make plans for another coffee date. "See you soon, darling" she says and waves while driving off. What a remarkable and inspirational woman, I think to myself, and begin pondering how to bring justice to her gripping story...

We live in a world where facts and fiction get blurred
In times of uncertainty you need journalism you can trust. For only R75 per month, you have access to a world of in-depth analyses, investigative journalism, top opinions and a range of features. Journalism strengthens democracy. Invest in the future today.
Subscribe to News24
Related Links
Meet the dynamic duo who 'fuel the Ferrari legend' in South Africa
Sometimes taking a step back means moving two steps forward - Merc's PR
Next on Wheels24
REPORT | Statistics SA highlights transport disparities between women and men