Image: Koos Fleming
It's no surprise South Africans love bakkies as much as we do, and it's proven by the amount of love we get in our mailbox from readers.

Years ago there areas were pretty far and wide in between and bakkies just made for the best vehicle to cover distances on gravel roads, and do some off-roading on the farms. There's always an interesting story waiting to be told.

Wheels24 reader Koos Fleming sent in one such letter in response to our Mazda bakkie story earlier in May. It's such a nostalgic piece with beautiful, well-kept photos. You can really by the tone in his letter just how much he cherished this
bakkie.

"It was one of the cheapest vehicles available, but all I could afford at the time. As a basic, entry-level vehicle, it didn't have many features. It had no heater, no air circulation fan and an under-powered engine but the reason for selecting the Mazda was because of the protection plate in front of the engine sump. 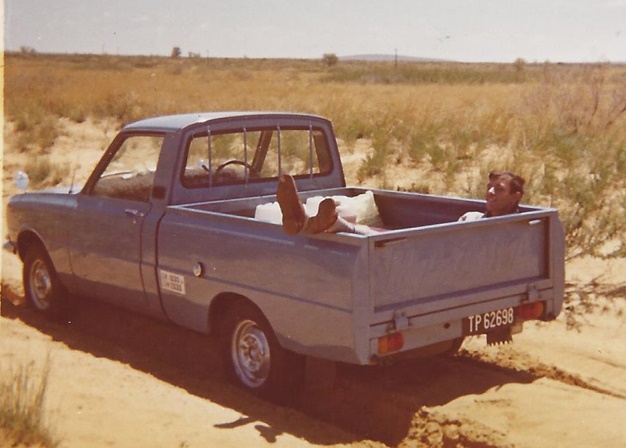 Have you owned a bakkie from previous generations? Please email us your photos and stories, we'd love to share them.

"My parents lived on a farm in the Kalahari, about 500 miles (800km) away with tar, gravel, and thick sand roads, and then there was always some off-roading on the farm too.

"Such road trips took me about nine hours to complete with the engine screaming at a maximum speed most of the time at 72mp/h (115km/h).

"Because of the small, 12-inch road wheels and the low engine power, the thick sand driving was done mostly in second gear from the four-speed gearbox with a screaming engine along with a sandbag on the loadbin for more traction on the wheels.

"Late nights in wintertime caused fog on the windshield, and with no heater or fan, I always opened the bonnet (front hinged) about 4-inches (10cm) and tied it down. This allowed the warm engine air to heat up the windshield and defrost it.

"I am now driving a Mazda CX3 with many fancy gadgets but that F1000 was very special. We had to upgrade later when the family could no longer fit in the bakkie." We live in a world where facts and fiction get blurred
In times of uncertainty you need journalism you can trust. For 14 free days, you can have access to a world of in-depth analyses, investigative journalism, top opinions and a range of features. Journalism strengthens democracy. Invest in the future today. Thereafter you will be billed R75 per month. You can cancel anytime and if you cancel within 14 days you won't be billed.
Subscribe to News24
Related Links
How the Mazda bakkie story started
Did you know: Mazda produced a bakkie that was powered by a rotary engine
Next on Life
LETTER | I'm a paramedic, if we can't get PrDPs, we get suspended without pay