WATCH | Buffalo crashes into vehicle as it tries to escape lions a buffalo crashing into a safari vehicle.
Latest Sightings

Video of a buffalo crashing into a safari vehicle in the Pilanesberg National Reserve has been released by popular wildlife website Latest Sightings. Latest Sightings shares videos captured by visitors to SA's game reserves.

The footage was captured from two different angles by Jennifer Coleman and Liechen Tonkin, who were on separate vehicles when the big chase happened. 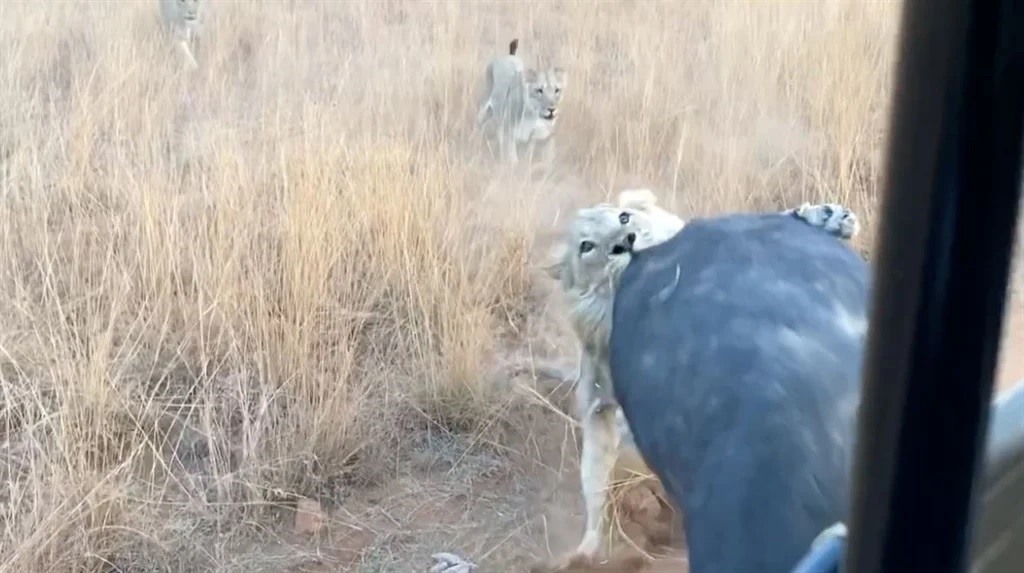 A buffalo crashing into a safari vehicle. A buffalo crashing into a safari vehicle.
Latest Sightings.

They were trying to spot some buffalo during a game drive after an alert that the animals had been seen in the area earlier in the day.

"We saw two buffalo in the distance but stopped to look at a lioness and her three cubs. From another direction, we saw another lioness and then a lion running. In a matter of seconds, it all unfolded right next to the game vehicle. We saw the buffalo charging the lion, then the buffalo running and the lions in pursuit,” says Tonkin.

“We were routing for the buffalo but were shocked when the buffalo ran into the vehicle in front of us.”

The two lionesses who were with the cubs joined the chase, Coleman adds. “The buffalo was very disorientated from being spun around and ended up crashing into the game viewing vehicle with a loud thud.  This gave the male lion a big fright and some time for the buffalo to get away and run off in the opposite direction.”

We live in a world where facts and fiction get blurred
In times of uncertainty you need journalism you can trust. For only R75 per month, you have access to a world of in-depth analyses, investigative journalism, top opinions and a range of features. Journalism strengthens democracy. Invest in the future today.
Subscribe to News24
Related Links
Five things to know about Tanzania
A photo of a grumpy sea turtle apparently giving the finger just won an award
CONCRETE JUNGLE | Counting legs
Next on Witness
FlySafair passenger who refused to wear mask ejected from flight Read more on:
wildlife
Daily Poll
Just for fun. Are you a butter person or do you prefer margarine?
Please select an option Oops! Something went wrong, please try again later.
Butter all the way
45% - 5 votes
Margarine is fine for me
18% - 2 votes
It makes no difference - I couldn't care less
36% - 4 votes
Previous Results
Latest Issue