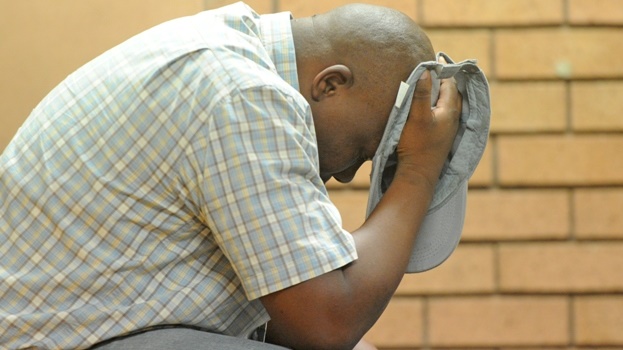 Accused Sifiso Hlengwa at the magistrate’s court on a previous occasion.
File

This is according to evidence by Pietermaritzburg district surgeon Dr N. Naidoo in the regional court on Monday.

He was testifying at the trial of ex-Msunduzi municipal security officer Sifiso Hlengwa, who is charged with Dlamini’s murder on January 14, 2016.

Dlamini was the acting manager of public safety at Msunduzi’s traffic department at the time of the shooting at the Washington Road headquarters.

Hlengwa has pleaded not guilty to murder. He alleged the shots were fired while he and Dlamini were wrestling for possession of the firearm and that he did not know if his finger, or Dlamini’s, was on the trigger.

Dr Naidoo, who conducted the post mortem, told regional court magistrate B. Jaynarayan the cause of death was “gunshot wounds to the head and abdomen”. He could not say in which order the gunshots were fired or struck Dlamini. One bullet had entered through the middle of Dlamini’s forehead and exited through the skull just in front of the right ear.

He had initially testified that the bullet exited behind the ear, but when confronted with photographs by defence advocate, Brad Osborne, he agreed this was incorrect and that the bullet had exited in front of the right ear.

According to Naidoo, the bullets had struck the aorta — the main artery to the heart — had penetrated the stomach and spleen and caused both lungs to collapse.

A bullet had also struck and “deflected” off the spine and gunshots had penetrated both kidneys, according to Naidoo’s evidence. Naidoo also described various injuries he said appeared to be “gunshot grazes” as well as bruises or “gunpowder burns”, as well as a sutured wound on the shoulder.

Asked by the prosecutor whether there was any evidence of defensive wounds on the victim, Dr Naidoo said it was possible the shoulder injury was defensive, as well as the “bullet grazes”, which could indicate that the victim had been moving to avoid being shot.

He was challenged in cross examination about the accuracy of various aspects of his post mortem report, and his alleged failure to make detailed notes during the procedure.

The defence has not yet finished cross examining him.

In his plea at the start of the trial earlier this year, Hlengwa said in a statement that he could not say if it was his finger or that of Dlamini that touched the trigger when the gun went off.

He said he and Dlamini had been involved in an argument that “grew heated” after he received a letter removing him from his post as the firearms control officer for the Msunduzi Municipality.

Hlengwa said he had left the office and had a drink of water while trying to compose himself. Dlamini then called him back to the office and closed the door.

He said when Dlamini pulled his (Hlengwa’s) firearm out of the waistband of his trousers, he turned and grabbed Dlamini’s hands and they wrestled over the weapon.

During the struggle they both fell to their knees and the gun went off the first time. “A further four shots were fired in rapid succession,” he added.

We live in a world where facts and fiction get blurred
In times of uncertainty you need journalism you can trust. For only R75 per month, you have access to a world of in-depth analyses, investigative journalism, top opinions and a range of features. Journalism strengthens democracy. Invest in the future today.
Subscribe to News24
Related Links
Co-accused in Panayiotou trial have a case to answer for
Rohde murder probe completed, trial to head to high court
Thembisile Yende murder accused consulted sangoma for 'cloak of invisibility'
Next on Witness
ANC Youth League picket in Durban over public representatives councillor lists