A new breed of techno-savvy sangomas 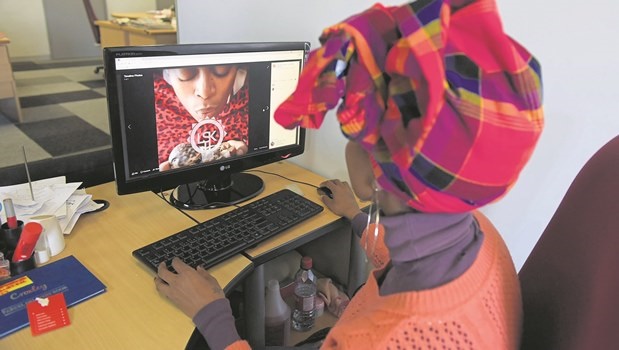 Thokoza gogo is the term commonly used on social media by people who consult with traditional healers online.

As the number of people who cannot physically access a traditional healer grows, so are many sangomas starting to offer their services online.

The scene is a far cry from the common perception of dishevelled and old-fashioned sangomas waving sticks around and operating from dingy huts in rural backwaters.

“Thokoza gogo” in Zulu means “Greetings, ancestors”. The title of sangomas is “Gogo” meaning one (grandmother) who leads you by the hand.

“Thokoza gogo. I dream of myself drowning in the sea. There is also a snake biting me. I don’t know what it means. I’m afraid to even swim because I will drown,” reads a message on a Facebook page belonging to a digital sangoma.

The sangoma replies, “You are gifted. Answer your calling.”

This is but an example of the kind of messages that can be found on Facebook pages where people are getting online readings.

While cultural experts argue that culture is not static and changes according to the times, Weekend Witness asked how an ancient spiritual practice, such as traditional healing is transforming in the digital era making it more relatable and accessible.  Gone are the days when people used to walk or drive long distances to consult with sangomas. Now, they have access, at the tip of their fingers, to a new breed of techno-savvy sangomas who are available on social networks.

Pietermaritzburg-born former fashion model Nokulinda Mkhize (33) has been a practicing sangoma for 10 years.  Mkhize’s @noksangoma Instagram feed has over 11 000 followers, and her slickly designed website features an online store, a brief autobiography and some newspaper columns she has written.

Other popular pages on Facebook include Gogo Dineo Ndlazi Spiritual Healing, which has over 14 000 likes.

According to the page, Gogo Dineo offers counsel and dream interpretations and also shares material on spiritual wellness from an African esoteric perspective.

Gogo Moyo, who refers to herself on the page as a “digital sangoma”, describes herself as a sangoma who throws bones, deciphers dreams and teaches about African cultures and traditions.

Her Facebook page has over 1 000 followers. According to the page, Gogo Moyo charges R300 for telephonic or Skype consultations.

Gogo Ntombiyamanzi, who, according to her Facebook page, is based in Umlazi and has over 3 000 likes, also consults online or in person.

While millennials are embracing technology for consultations saying it is more accessible, staunch traditional healers have criticised the practice, describing it as unthinkable.

Kwenzekile Mngoma, a Durban-based traditional healer who also consults online, said she did it to accommodate her clients.

“My clients are mostly young, busy women like me, so they appreciate the convenience of digital consultations. Some women prefer to e-mail me; others choose WhatsApp or direct messaging on Instagram. I also do consultations on FaceTime or on the phone.

“I haven’t found my accuracy to be diminished through digital sessions. Yes, it’s nice to be able to see someone and read them in front of me, but as long as a client is honest and willing to trust me, a digital session is just as fruitful.

“My fee structure is the same as it would be for in-person consultations.

“I charge R100 to R150 for an initial session or initial e-mail/WhatsApp response or a phone call. Specific treatments, such as a cleanse, start at about R500 up to R1 500, depending on what you require.”

The 31-year-old told Weekend Witness that she messages her clients the instructions and posts the ingredients they need.

“You can then work through the cleanse or treatment yourself once you receive your parcel.”

Digitising her processes hasn’t taken away from her more traditional rituals.

“I still wake at 4 am before a day of consultations, burn incense and greet my ancestors, asking them to give me energy and clear visions for my clients.”

‘Modernity should be embraced but also critically examined’

DR Velaphi Mkhize, founder and president of the Umsamo Institute and the South African Healers Association (SOAHA), said: “Consulting on social media is off-limits. It [consulting] is supposed to be done face to face; social media consultations are done by fly-by-nights. It plays on people’s desperation.”

While he was against online consultations, Mkhize said young sangomas should not be criticised for adopting other modern ways to heal.

“They have a deeper understanding of problems troubling young people.”

“They can easily relate and understand the circumstances millennials live under. Traditional healing is a gift, and we each have different gifts.”

Mkhize said the interest by millennials on social media showed that young people were beginning to reclaim their heritage, and that those with the calling are not ashamed of it and are practising openly and proudly.

“Apartheid came with different religions which colonised black people to shun away from their traditional beliefs.

“Young people are faced with a lot of different circumstances and they are beginning their quest for identity. While others repel, parents are forced to go back to the traditional norms.”

However, he cautioned that most young traditional healers went into initiation needlessly.

“The problem is that traditional healing has become so commercialised. People use it to gain monetary value and take people through initiation when it is not necessary.”

Mkhize said people showing an interest in traditional healers online was an indication of the everyday problems they faced.

“Young people have got more problems than before. It is still embarrassing to go and consult with a sangoma so they use social media to keep the consultations a secret.”

He said that while traditional healing was becoming more relatable, people should beware of falling prey to charlatan healers.

“Traditional healing is a calling to heal and counsel people but unfortunately, like in all other professions, there are chancers.”

“Not all traditional healers are authentic. While embracing indigenous medical approaches, people must also be careful that they are not lured by deception healers whose only aim is to make money,” Mhlongo added.

He said that because of the lack of regulation some bogus traditional healers work unchecked.

“Some people do not respect that this is a spiritual and sacred journey.”

“Today, anyone can wake up and decide that they want to be a sangoma because it has been glamorised on social media.”

Mbatha said while the notion was that young people were becoming more open about consulting with traditional healers, others continued to do this in secrecy.

“The biggest challenge is the criticism of this belief system and its association with the use of black magic, voodoo, and killing of innocent people for their body parts for muthi purposes.”

“The positive role of African indigenous belief systems has been lost in this negative whirlwind of myth, stigma and misconceptions,” Mbatha added.

Celebville may seem to be all about the glitz and glam but, for some celebrities, answering the call of their ancestors has been most important.

Many have now been candid about exploring a spiritual and more cultural realm that forms part of their true identities.

Speaking to Weekend Witness, Derrango said he completed his sangoma training in 2016 but he is not practising as a traditional healer.

Derrango said he went on a five-month spiritual journey because it was an instruction his gogo received which he had to honour.

“I wouldn’t have ignored this spiritual calling as I respect my culture and my religion,” he told the publication.

The popular kwaito star said his music was also a calling, so he won’t ignore it.

“Before I got into music, I had a dream where my gogo called me into music and I did as I was told,” he said.

The Resista hit maker said he went through the journey in June 2016, which took him away from his family.

“When I felt like quitting, my gobela [teacher] Zanele Zuke was by my side, encouraging me to hold on as I would soon be finished.”

He said the process was supposed to be handed down to his mum and later to his sister, but neither of them did it.

“The calling fell to me and I had to overcome it and get it done,” Derrango said.

‘Understanding is the key’

Nene said some people criticise traditional healing because they do not have an understanding of the African indigenous belief systems, which perpetuates the myths and the stigma around the practice.

“There are things Western doctors are not able to heal. Traditional healers have a deeper understanding.”

“Western doctors can’t translate dreams and their meanings,” he said.

The 28-year-old described himself as a traditionalist and said he was not ashamed to share his beliefs with his peers.

“I am not being forced. I believe that all my blessings are from my ancestors,” he added.

Nonjabulo Nsindane (24), who was brought up in a Christian family, said she often consults with umthandazi (a prophet) for “protection”.

“A lot of things are happening in the spiritual realm and the holy water helps to protect me.”

Nsindane told Weekend Witness that she consults the prophet once every month.

“There was a point when I opted to stop seeing umthandazi. The readings would leave me feeling depressed because it was always negative.

“I only went back because using the holy water works for me. I believe that my belief in God is what helps me more than anything,” she added.

ACCORDING to the South African Traditional Healers Institute (sathi.org.za), when consulting a traditional healer you should:

* Look at their track record in the community, whether they are known and recommended;

* Find out if the healer is accredited with a traditional healers’ organisation;

* Ask if they can refer you to other healers in your area;

* Ensure that they have attended workshops on basic primary health care; and

* Ensure they are knowledgeable about current health issues

If you need a specialist, ensure your healer is not a general practitioner of traditional medicine. Ask for evidence of their expertise.

Read more on:
pietermaritzburgsangoma
Daily Poll
AfriForum has launched a legal bid to have the five-year renewal of drivers’ licences scrapped. What are your thoughts on the matter?
Please select an option Oops! Something went wrong, please try again later.
I agree. The renewals are a waste of time and money
100% - 4 votes
The department has to keep a check on drivers somehow
0% - 0 votes
It makes no difference to me - I drive without a licence anyway
0% - 0 votes
Previous Results