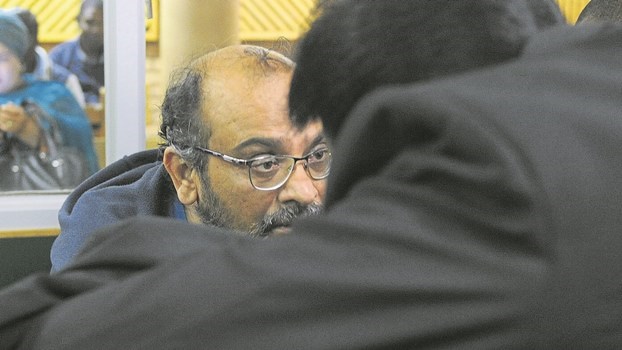 Asif Muhammad, who is charged with conspiracy to kidnapping, at an earlier court appearance.
Ian Carbutt

The man who is alleged to have conspired to kidnap the children of wealthy Pietermaritzburg businesspeople for ransom, has been granted R5 000 bail.

Local magistrate Vincent Mcanyana said on Friday that he is not satisfied that the interest of justice permits for the further detention of Asif Muhammad.

The 47-year-old man is charged with conspiracy to kidnapping a 15-year-old girl for ransom of between R3 million and R4 million. An “informer” alerted police of the plans, who in turn got undercover agents to set up a trap.

Mcanyana in his judgment delved into the reasons behind bail being opposed and what his thoughts were on the submissions made by state prosecutor Rene Padayachee and advocate Harold Knopp, SC.

The magistrate said it seems to him that the case revolves around police officers and agents used in the undercover operation. Therefore, there is no chance of Muhammed interfering with the witnesses.

He said the case against the man is no doubt very serious.

“There seems to be a case against him. However, that is not the prime consideration. This is not a decisive factor,” he said.

Of Muhammed being a flight risk, the magistrate said he is a South African citizen of Pakistani origin. He is married and has two children. The man has a fixed address in Church Street and also runs a business on that street.

He is the sole breadwinner for his family and has no previous convictions or pending cases.

The magistrate added that Muhammad’s travel documents have been handed to the authorities and that he did not think there was a likelihood that he may be a flight risk.

He said that the fears of the state and the investigating officer could be addressed by bail conditions.

He ordered that Muhammed report twice a week, on a Monday and Friday, to the Pietermaritzburg Police Station.

He is not allowed to apply for any travel documents pending the finalisation of the case. In addition, he is also not allowed to leave Pietermaritzburg without the permission of the investigating officer, Warrant officer Johannes de Lange.

He told the court in an affidavit submitted during the bail hearing that Muhammad contacted the informant and told him that there is a “lucrative business in kidnapping” in Pietermaritzburg.

He said he identified the first target and wanted the informant to arrange people to do the kidnapping. He also wanted the girl taken out of KZN, to Lesotho, where Muhammed previously had a business.

Two undercover policemen posed as the kidnappers and made contact with Muhammad. He confirmed who the kidnapee was going to be and also told the officers about the next two people they should kidnap. The man was subsequently arrested.

The case has been adjourned to November 19.

We live in a world where facts and fiction get blurred
In times of uncertainty you need journalism you can trust. For only R75 per month, you have access to a world of in-depth analyses, investigative journalism, top opinions and a range of features. Journalism strengthens democracy. Invest in the future today.
Subscribe to News24
Related Links
Officials, expert reveal possible SA links to kidnap of Tanzanian tycoon
Kidnap plan to net R4 mln
Chadian child bride 'kidnap' case postponed
Next on Witness
Running to remember slain KZN NG Church minister

Read more on:
pietermaritzburgkidnap
Daily Poll
Former liberation struggle ex-combatants from Pietermaritzburg on Wednesday staged a protest outside the ANC Johannesburg headquarters where they demanded benefits to the tune of R2,2 million each. Do you think they should be entitled to this amount?
Please select an option Oops! Something went wrong, please try again later.
Yes
8% - 32 votes
No
79% - 318 votes
A lesser amount perhaps, but not so much
13% - 51 votes
Previous Results