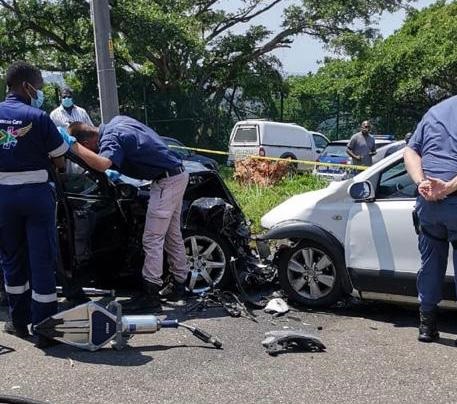 A man, believed to be a drug dealer, was killed in a crash while trying to evade the police.
SAPS

A man, believed to have been a drug dealer, died while trying to flee from police in Morningside, Durban, on Thursday.

Naicker said as the police officers approached the men, one of them sped off in his vehicle.

“A chase ensued towards Morningside and at the corner of Norwood and Trematon Drive; the suspect collided with another vehicle. The man believed to be in his thirties died at the scene and the other motorist was transported to hospital for medical attention.”

Naicker said a search conducted inside the man’s vehicle uncovered drugs such as methcathinone and cocaine valued at R5 000. The team also seized R1 640 in cash, which is suspected to be the proceeds of a drug trade.

Police have opened a docket for possession of drugs and culpable homicide for further investigation.

We live in a world where facts and fiction get blurred
In times of uncertainty you need journalism you can trust. For only R75 per month, you have access to a world of in-depth analyses, investigative journalism, top opinions and a range of features. Journalism strengthens democracy. Invest in the future today.
Subscribe to News24
Next on Witness
Pedestrian killed in KZN crash

Read more on:
durbankznpietermaritzburgkwazulu-natalcrimedrug bustdrugs
Daily Poll
South African MPs on Tuesday rejected a bill to amend the Constitution to make land expropriation without compensation lawful. What are your thoughts on the matter?
Please select an option Oops! Something went wrong, please try again later.
I’m happy the bill was rejected
88% - 7 votes
I’m angry that it was rejected
13% - 1 votes
It doesn’t affect me, so it doesn’t matter
0% - 0 votes
Previous Results