Sandbags forming part of the barrier between the railway line and the river have started falling off.

There are mounting concerns about the deteriorating condition of the sandbank barriers that are threatening to collapse on the railway line and Toti River, in Amazimtoti, south of Durban.

Parts of the barriers started falling off following the recent heavy rain.

“The river is eroding more and more. The river is now about three meters away from the railway line and the next heavy rain is going to undermine the sand bags,”
George Snodey, Amanzimtoti resident

Residents of Amanzimtoti have also sounded the alarm to authorities to secure the area to prevent another disaster. They told The Witness that in 2012, a goods train completely derailed from the railway line and plunged into the nearby sea after the barriers were weakened by rising sea levels.

Four train staff employees were injured and it took months for the railway line to be fixed, resulting in many train commuters having to find alternative transportation. 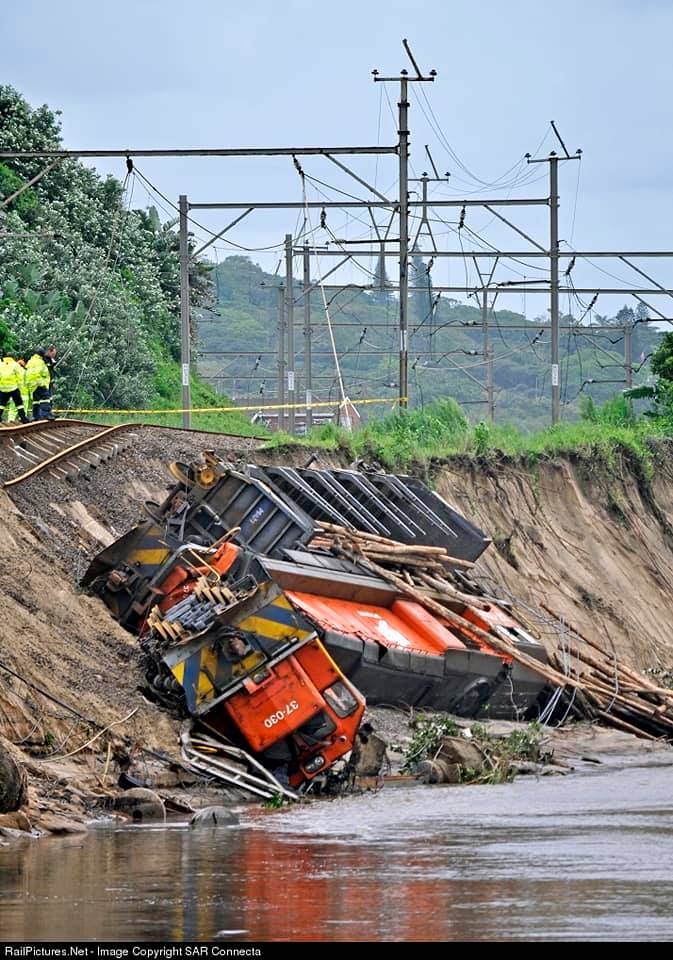 In 2012, a goods train fell into the Toti river after the railway line was weakened by rain.

George Snodey, a long time Amanzimtoti resident, said after last week’s rains, they noticed that the barriers were becoming unstable.

“The river is eroding more and more. The river is now about three meters away from the railway line and the next heavy rain is going to undermine the sand bags,” he said.

Snodey said history could repeat itself and they could find themselves with another disaster because the authorities tend to ignoring warnings from the community until it is too late.

“If they do not do something, it is going to collapse. They knew about it last time and it cost people millions. People suffered back in 2012,” he said. Sandbags forming part of the barrier between the railway line and the river have started falling off.

Andre Beetge, Ward 97 councillor, said he had been working with the eThekwini Municipality to bring the matter to the attention of the Passenger Rail Agency of South Africa (Prasa) which owns the railway infrastructure.

Beetge described the infrastructure as being “under threat”.

“Nature is pushing the river to that side, it is not a man-made situation, but something that usually happens around this time of the year. Prasa needs to secure their infrastructure,” he said.

Beetge said Prasa conducted two site inspections in the area but no actual work had been done.

He said the municipality tried to redirect the river flow away from the railway but that was undone by winds.

He said passenger trains still do pass on the railway everyday.

“Previously when the infrastructure fails, they (Prasa) used buses and those buses cause all sort of havoc in the community,” he said.

Prasa had not responded to The Witness’ query at the time of publication.

We live in a world where facts and fiction get blurred
In times of uncertainty you need journalism you can trust. For only R75 per month, you have access to a world of in-depth analyses, investigative journalism, top opinions and a range of features. Journalism strengthens democracy. Invest in the future today.
Subscribe to News24
Related Links
La Mercy stormwater pipe to be relaid after rain damage
Home partially collapses due to rain in La Mercy, north of Durban
WATCH | Lucky escape for Pietermaritzburg families as tipper truck hits two homes
Next on Witness
SAA to resume Durban flights in March