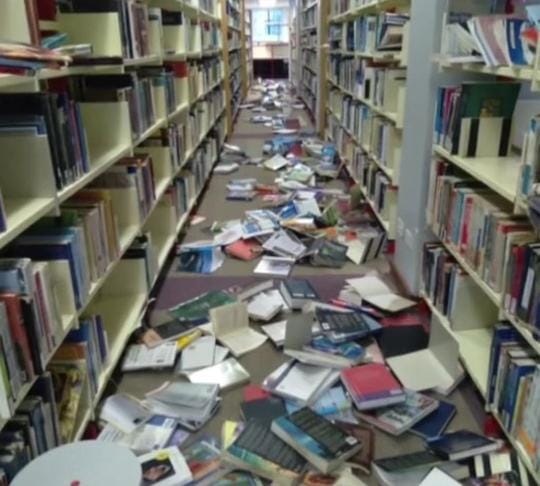 A library at the Durban University of Technology after being trashed during the student protest.
Screengrab

Staff at the Durban University of Technology were coughing heavily as they ran out of a building engulfed by smoke during a student protest.

On Monday, students at the Steve Biko Campus allegedly started a fire in one of the university's buildings and trashed the library.

A plume of smoke could be seen coming from the S Block on Steve Biko campus.

As a result, three of the university's affected campuses have been closed until Wednesday, Steve Biko, ML Sultan and Ritson Campus.

The Witness understands the protest is related to a number of issues mainly Wi-Fi at student residences and National Student Financial Aid Scheme.

In videos seen by The Witness, one of the university's library is trashed with  books off the shelves and on the floor.

"A group of protestors from a student political organisation turned extremely violent and damaged DUT property, thereby threatening and compromising the safety and security of our university community," it read.

Besides the aforementioned campuses, DUT said its remaining four campuses will remain open.

"We will continue to closely monitor the situation before implementing any further steps to protect the lives and wellbeing of our staff and students and to secure university property," reads the communique.

"Campus Protection, in conjunction with the South African Police Services, have already started apprehending suspects and they will continue to gather evidence and take appropriate action against those who broke the law and/or violated university rules/policies."

We live in a world where facts and fiction get blurred
In times of uncertainty you need journalism you can trust. For only R75 per month, you have access to a world of in-depth analyses, investigative journalism, top opinions and a range of features. Journalism strengthens democracy. Invest in the future today.
Subscribe to News24
Next on Witness
Mercedes looter case adjourned to February next year

Read more on:
durban university of technologykwazulu-nataldurbanbereapietermaritzburgdutstudent protestnsfas
Daily Poll
The IFP has called on the Education Department to ban all matric ‘pens down’ celebrations. What are your thoughts on this matter?
Please select an option Oops! Something went wrong, please try again later.
Ban those parties. We’re in a middle of a pandemic
50% - 7 votes
Don’t ban them, they are a rite of passage
14% - 2 votes
I never approved of such parties anyway
36% - 5 votes
Previous Results