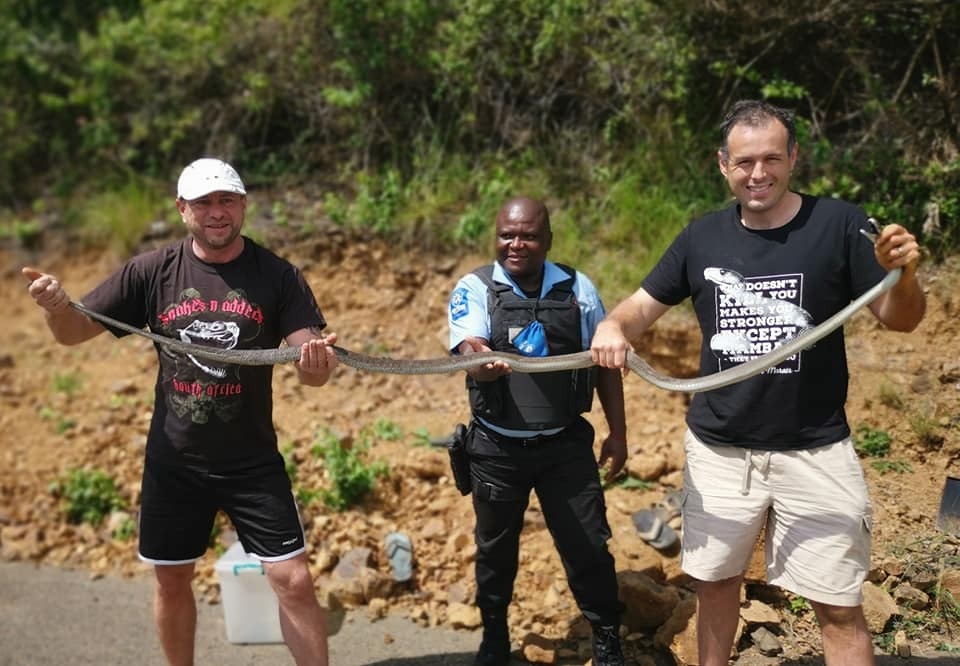 Evans said catching four mambas in one day was the most he had ever caught in a day.

According to Evans, he caught the first early in the morning, on a road off Varsity Drive, Reservoir Hills.

He said the black mamba was seen on the side of the road, trying to get into a hole in a recently dug up, and re-filled trench.

He said he raced over and on his way, he picked up his friend Nick Saunders, who lives up the road from him.

“An officer from Blue Security stayed on scene, keeping an eye on the snake for us. Fortunately, the snake hadn’t really moved during our rush there. It was really struggling to get down the hole, although most of the body was down now. I grabbed the tail, and Nick (Saunders) started digging away sand,” he said.

Evans said they soon learnt that the mamba had gone surprisingly deep.

He said they switched roles, Saunders held the tail, and he started shifting rocks and sand away.

“The more we uncovered, we discovered she was heavily gravid (pregnant). She was probably going in there to lay. After more and more digging, she eventually started reversing. Nick held onto the tail, and as the head appeared, I pinned her down,” he said.

Evans said the snake was about 2.3m long and she’ll be released after she lays her eggs.

He said when her eggs hatch in a few months time, the snakelets will also be released.

We live in a world where facts and fiction get blurred
In times of uncertainty you need journalism you can trust. For only R75 per month, you have access to a world of in-depth analyses, investigative journalism, top opinions and a range of features. Journalism strengthens democracy. Invest in the future today.
Subscribe to News24
Next on Witness
Harry Gwala District Municipality commits ‘zero tolerance’ to fraud and corruption.