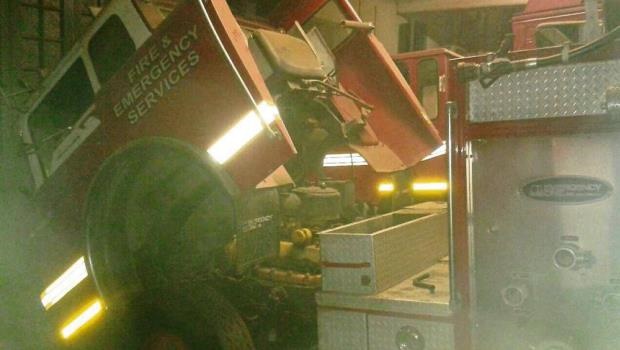 One of the many fire engines that are lying in storage while waiting for components from abroad.
Supplied

Pietermaritzburg - If your home catches alight tomorrow, you may have to wait for a mechanic to repair the fire engine before firefighters arrive to assist you.

This is the harsh reality facing fire services in Msunduzi.

The municipality confirmed in response to inquiries from The Witness that there are major mechanical issues with four of Msunduzi’s leading fire engines, and that two more are completely non-operational.

A firefighter, who cannot be named as staff members are not authorised to speak to the media, told The Witness that Msunduzi’s fire services are under constant strain, with few resources and not enough workers.

With grass fires rife during this season, firefighters said they do not have enough resources to attend to veld fires.

“The batteries for some of our fire engines are constantly on charge, and when we get called out to a scene, we have to call the mechanic to start the engine before we respond,” said the firefighter.

He added that at times mechanics also have to assist them to restart the engines while they are en route to fires.

He said the engines that are operational are overworked, as most of the fire service’s bakkies and fire engines are waiting to be repaired.

According to the vehicle check sheet, which The Witness has seen, numerous faults are being reported daily to the managers.

However, the firefighters said their complaints have fallen on deaf ears, as managers ask them “to make a plan” instead of repairing the faults.

“When we report the faults, we are told we must make a plan. Must we make a plan with our lives? Our lives and the lives of every citizen in Msunduzi are at risk with our fire services operating the way we are,” said the firefighter.

Another fireman said there were a “few occasions” when the Jaws of Life did not work when emergency services responded to an accident, resulting in another fire truck having to be called out.

“People’s lives are at risk and they do not even know it. We have been raising these matters since 2009, and now we are fed up because it seems everyone is trying to keep quiet about it,” said the fireman.

The firefighters said in addition to not having the proper tools of the trade, the staff are overworked.

They said areas such as Northdale, Vulindlela and Ashburton are growing communities, but there are insufficient fire engines and staff to service those areas.

“We need a full complement of staff. The city is growing tremendously, but our fire services are going down,” said a firefighter.

Apart from the numerous faults on the fire engines and bakkies, the firefighters said they are forced to work in dilapidated buildings that are infested with fleas and cockroaches.

Responding to questions sent to the municipality, Madeleine Jackson confirmed that the fire fighting fleet was strained.

She said while every effort was made to speed up the repairs to fire engines, “supply chain processes have to be followed”.

In the meantime, firefighters have to use the reserve fleet, which is made up of older units. Most of the fire fleet consists of highly specialised, imported equipment, said Jackson.

“Major mechanical components have to be sourced by agent companies from abroad. In these instances, we rely on our reserve fleet, which are generally older units but which are operational,” she said.

Jackson added that a minimum of 24 firefighters must be on duty at any given time, but said that problems were created by staff shortages and absenteeism.

“This results in staff being brought in on overtime shifts,” she said.

We live in a world where facts and fiction get blurred
In times of uncertainty you need journalism you can trust. For 14 free days, you can have access to a world of in-depth analyses, investigative journalism, top opinions and a range of features. Journalism strengthens democracy. Invest in the future today. Thereafter you will be billed R75 per month. You can cancel anytime and if you cancel within 14 days you won't be billed.
Subscribe to News24
Related Links
Fire at Woodburn garage quickly doused
Fire at dump site can take a week to extinguish
We’ll only attend emergencies, say fire-fighters on go-slow
Next on Witness
PICS | Public warned not to try killing snakes after an injured black mamba was rescued

Read more on:
pietermaritzburgmsunduzi municipalityfire
Daily Poll
Arts and Culture Minister Nathi Mthethwa is being criticised for defending government’s controversial plan to erect a flag at Freedom Park in Pretoria to the tune of R22 million. What are your thoughts on this matter?
Please select an option Oops! Something went wrong, please try again later.
It’s worth the price as it will help foster social cohesion
3% - 2 votes
A R22 million flag is absolutely ridiculous
41% - 31 votes
There are better things they could spend that money on to help the poor
56% - 42 votes
Previous Results