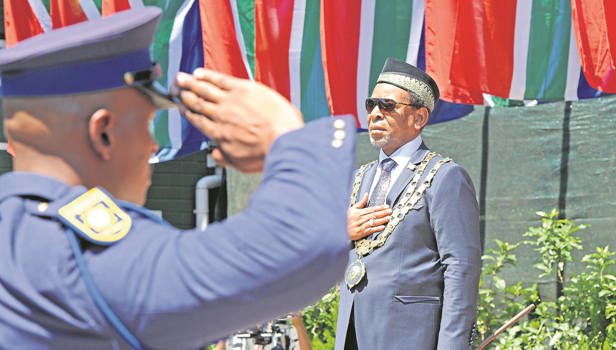 King Goodwill Zwelithini listens to the national anthem at the official opening of the KwaZulu-Natal legislature at the Royal Show grounds on Tuesday.
Ian Carbutt

Pietermaritzburg - Zulu King Goodwill Zwelithini has described KwaZulu-Natal and South Africa as a province and a country at a crossroads, and has called for immediate action.

The king delivered his speech at the official opening of the KZN legislature at the Royal Showgrounds on Tuesday, in his usual frank manner.

Talking tough, the king had a go at greedy politicians, who he said did not put the interest of the next generation first and he called for an end to political killings.

Two MECs received a tongue-lashing for not supporting the king’s programmes.

The king said reconciliation efforts and the social cohesion programme had failed to reach their desired goals and called for innovations.

The king also called for an end to “fancy” government events and commissions, which he said are a waste of taxpayers’ money.

In a speech that lasted two hours, the king said the country needed to think carefully before electing its leaders.

“Unfortunately we have more of these politicians. Most of them are in power because they know how to talk the talk.

“They do not want to vacate positions, they would rather let people die than leave positions.

“They would rather have the municipalities collapse as long as they know they will get what they want in the next five years,” he said.

The king called for an end to political killings, which had increased during the run-up to last year’s local government elections.

As many as 14 political activists were killed during that period.

“Women were killed by men who were carrying guns. This should not happen again. It will destroy our country,” he said.

During his speech, the king singled out MECs Ravi Pillay (Human Settlements and Public Works) and Belinda Scott (Finance), for not being part of the collective government.

The king asked Premier Willies Mchunu to arrange a meeting so they could have a frank discussion.

“I just wish for us to work together and much closer. Today I’m extending an open invitation to them to come to the Reed Dance at eNyokeni royal palace.

“Since they are part of my government‚ it looks bad that we are apart. If we speak of a rainbow nation and social cohesion let’s do it in a unifying manner. Since you also live here‚ I am also your king.”

The king called for an investigation into the high costs of refurbishment of one of his palaces.

“I will be glad if an investigation can be done on the Ngwavuma palace that has already cost R10 million‚” he said.

We live in a world where facts and fiction get blurred
In times of uncertainty you need journalism you can trust. For 14 free days, you can have access to a world of in-depth analyses, investigative journalism, top opinions and a range of features. Journalism strengthens democracy. Invest in the future today. Thereafter you will be billed R75 per month. You can cancel anytime and if you cancel within 14 days you won't be billed.
Subscribe to News24
Related Links
Assorted traditional outfits and hats at legislature opening
Next on Witness
Fear that thousands in flood shelters may risk contracting Covid-19

Read more on:
king goodwill zwelithinipietermaritzburg
Daily Poll
AfriForum has launched a legal bid to have the five-year renewal of drivers’ licences scrapped. What are your thoughts on the matter?
Please select an option Oops! Something went wrong, please try again later.
I agree. The renewals are a waste of time and money
89% - 42 votes
The department has to keep a check on drivers somehow
9% - 4 votes
It makes no difference to me - I drive without a licence anyway
2% - 1 votes
Previous Results