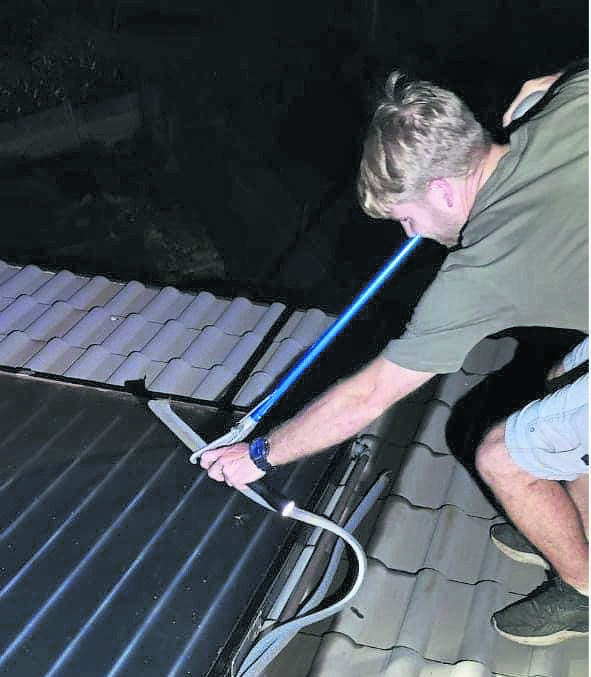 The ‘mamba’ is captured.

With summer starting, snake catchers all over KZN are constantly on the alert for snake callouts — but sometimes find themselves in for a surprise.

Recently the Crocworld Conservation Centre team — Martin Rodrigues, James Wittstock and Grant Webster — responded to a call-out after a black mamba had allegedly been spotted on the solar panel of a double-storey house on the KZN South Coast near Scottburgh.

“From time to time, we get called out for reports of snakes which, surprisingly, turn out to be anything but a snake,” said Wittstock. “This was one of those times. It turned out that the ‘mamba’ was, in fact, just the cable insulation. We couldn’t resist the opportunity to snap a quick picture after I safely ‘captured’ the insulation.”

But Wittstock cautioned residents that with the weather warming up snake season had arrived.

Scottburgh’s Crocworld Conservation Centre offers a free service of identifying and removing snakes for the communities of Scottburgh, Umkomaas, Pennington and Park Rynie.

We live in a world where facts and fiction get blurred
In times of uncertainty you need journalism you can trust. For only R75 per month, you have access to a world of in-depth analyses, investigative journalism, top opinions and a range of features. Journalism strengthens democracy. Invest in the future today.
Subscribe to News24
Related Links
Snake-catching duo return to film hit show in Durban
Spring also brings snakes — a catcher’s crucial advice
Popular snake catcher dies in car crash
Next on Witness
ANC deputy chief whip called a “fool” by EFF MPL

Read more on:
kznpietermaritzburgscottburghkwazulu-nataldurbansnakes
Daily Poll
A teacher found guilty of sexual misconduct relating to the job will never be able to work in a public school in South Africa again, under new employment rules from the Department of Basic Education. What are your thoughts on this?
Please select an option Oops! Something went wrong, please try again later.
This is a step in the right direction by the department.
17% - 9 votes
At last! What took them so long?
50% - 27 votes
Each case should be weighed on its merits rather than having a blanket approach.
33% - 18 votes
Previous Results
Latest Issue