Elections 2021: Zuma casts his vote at the polling station in Nkandla 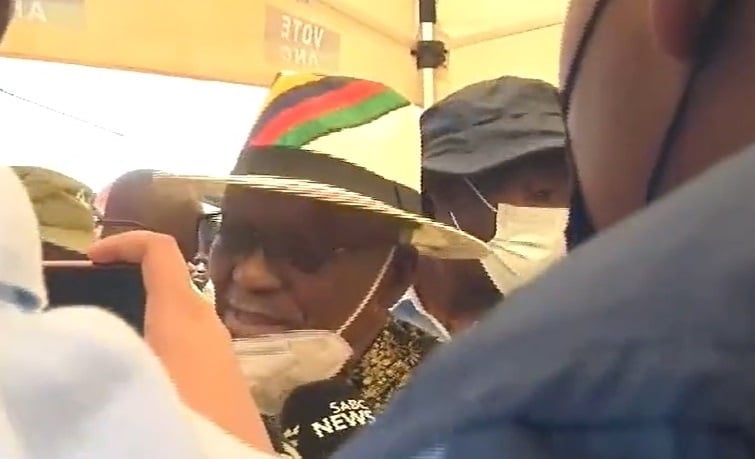 Former president Jacob Zuma speaking to the media after casting his vote in Nkandla on Moday.
eNCA

Wearing his trademark black long-sleeve shirt with green and brown leaves, Zuma waved at the crowd outside the voting station as he made his way inside.

Zuma, who looked relaxed, did not speak to reporters who had camped outside the voting station since the morning.

The former president, who lives in ward 13, which is currently under the IFP, recently encouraged his supporters to vote for the ANC.

This was despite the fact that Zuma’s backers had blamed the ANC leadership for his arrest and incarceration in July.

We live in a world where facts and fiction get blurred
In times of uncertainty you need journalism you can trust. For 14 free days, you can have access to a world of in-depth analyses, investigative journalism, top opinions and a range of features. Journalism strengthens democracy. Invest in the future today. Thereafter you will be billed R75 per month. You can cancel anytime and if you cancel within 14 days you won't be billed.
Subscribe to News24
Next on Witness
Three men, including a 72-year-old, arrested for possession of illegal firearms in KZN

Read more on:
pietermaritzburgsouth africadurbankznnkandlakwazulu-natalmunicipal elections 2021jacob zumaelections
Daily Poll
Floods have engulfed KZN once again, damaging more roads and houses, leaving more people homeless and in need of shelter. Meanwhile, people who were affected from the first flight of floods are still packed in community halls. How do you think the people of KZN can be helped?
Please select an option Oops! Something went wrong, please try again later.
The government must speed up their plans and provide houses
43% - 34 votes
Pray for KZN
20% - 16 votes
Private businesses must intervene and help because government is unreliable
37% - 29 votes
Previous Results