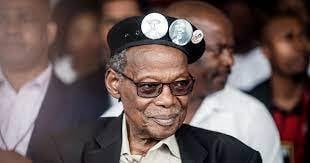 IFP founder, Mangosuthu Buthelezi (93), who was recently infected with Covid-19, has been admitted to hospital.

In a statement issued on Wednesday, the Buthelezi family spokesperson, Bhekuyise Ngqengelele Buthelezi, confirmed that the IFP founder was admitted to hospital after feeling unwell.

“However, he is simply undergoing medical tests as he experienced high blood pressure on Monday night and subsequently felt unwell.

“On Tuesday afternoon, his doctors felt it wise for him to be admitted to hospital for all the necessary checks, as this would also allow him to get some much-needed rest,” he said.

Buthelezi relinquished his position as IFP president in 2019.

However, he continued serving as the party’s MP.

We live in a world where facts and fiction get blurred
In times of uncertainty you need journalism you can trust. For 14 free days, you can have access to a world of in-depth analyses, investigative journalism, top opinions and a range of features. Journalism strengthens democracy. Invest in the future today. Thereafter you will be billed R75 per month. You can cancel anytime and if you cancel within 14 days you won't be billed.
Subscribe to News24
Next on Witness
DA in Okhahlamba welcomes funds to fix R74 and R600

Read more on:
ifpkwazulu-nataldurbankznpietermaritzburgsouth africa
Daily Poll
Many countries that closed their borders due to the Covid-19 pandemic are now welcoming tourists again. Are you comfortable travelling to other countries yet?
Please select an option Oops! Something went wrong, please try again later.
I only travel for work
5% - 2 votes
Yes, I’m okay with travelling internationally now
54% - 20 votes
I don’t plan on travelling internationally until Covid is over
41% - 15 votes
Previous Results