The KwaDukuza People’s Park on the KZN North Coast was opened on Tuesday, more than a year after construction was completed.

The upgrades to the park that began in November 2018 were completed in November 2020, but the park was kept locked because of Covid-19 regulations and lockdown levels not allowing for gatherings until recently.

The park, which cost more than R12 million to build, was officially opened by KZN MEC for Co-operative Governance and Traditional Affairs (Cogta) Sipho Hlomuka.

The upgrade was funded by KZN Cogta and saw the park being upscaled with new amenities, including ablution facilities, an outdoor gym, braai areas, an amphitheatre, play areas, a giant chess board and CCTV security cameras. 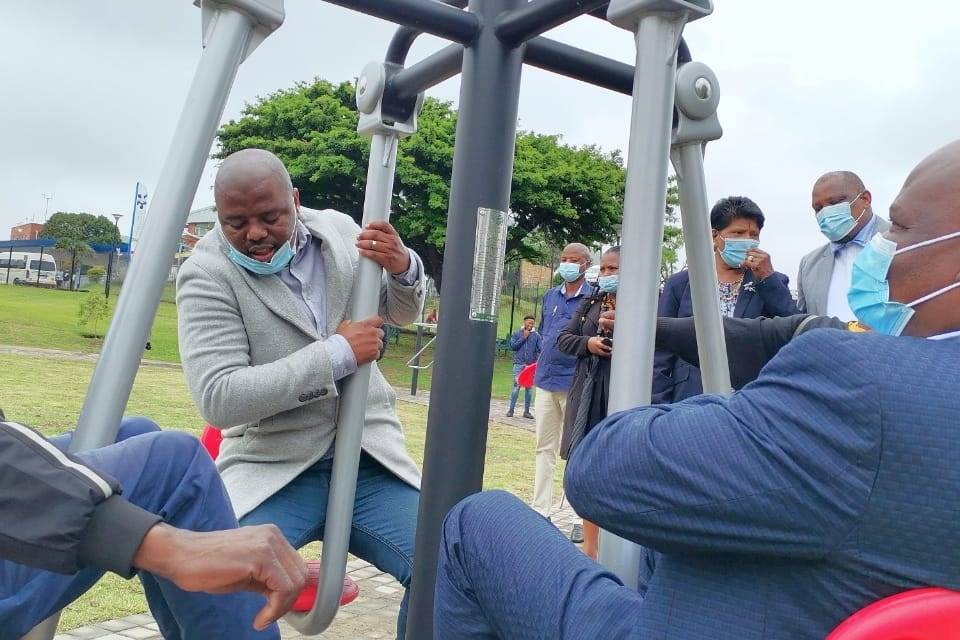 KZN Cogta MEC Sipho Hlomuka tests out the outdoor gym equipment at the opening of KwaDukuza People’s Park on the KZN North Coast.

Hlomuka said the upgrade marks an important milestone for residents of KwaDukuza who will now have easy access to recreational facilities.

Speaking during the handover, KwaDukuza Mayor Dolly Govender said the opening of the park was a cause for celebration for the people of KwaDukuza.

“This park will open many opportunities for families to gather and for any social activity to take place here. This is a welcome development which we are proud of as the KwaDukuza local municipality,” said Govender. Hlomuka said the upgrade was part of strategic projects the department was investing in with the aim of rejuvenating small towns.

“As a department, we understand the importance of fighting urban decay and projects such as this help us to keep our CBDs in a state that can attract investors,” said Hlomuka.

iLembe District Mayor Siduduzo Gumede thanked the MEC and the department for the ongoing investment.

“Through your department’s investment, MEC, many small towns have improved and upgraded their infrastructure, such as taxi ranks, storm water drainage or market stalls for small traders,” said Gumede.

We live in a world where facts and fiction get blurred
In times of uncertainty you need journalism you can trust. For 14 free days, you can have access to a world of in-depth analyses, investigative journalism, top opinions and a range of features. Journalism strengthens democracy. Invest in the future today. Thereafter you will be billed R75 per month. You can cancel anytime and if you cancel within 14 days you won't be billed.
Subscribe to News24
Related Links
GO!Durban Cycle Academy Bike Park opens in KwaMashu
Oral history project opens up opportunities for SA’s writers
KZN’s Kholwa Project music group scoop 64 gold medals
Next on Witness
At least 11 dead in multiple vehicle collision on N3

Read more on:
sipho hlomukapietermaritzburgkwadukuzakznkwazulu-natalcommunityrecreationconstructionparkcovid
Daily Poll
Do you feel safe in your home?
Please select an option Oops! Something went wrong, please try again later.
Yes, I stay in a safe neighbourhood
21% - 31 votes
Yes, I have the best security systems
4% - 6 votes
No, we hope/pray for the the best everyday
61% - 89 votes
I have a weapon in case I need it
13% - 19 votes
Previous Results