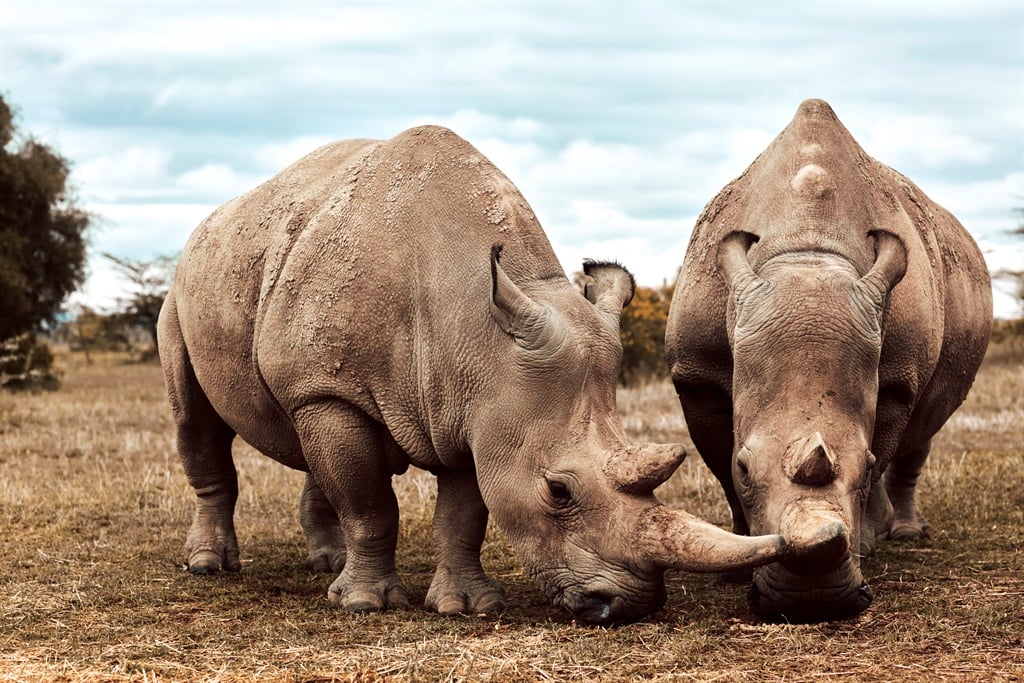 White rhinos are on the brink of extinction.
Supplied

Rangers in KwaZulu-Natal’s wildlife parks are ill equipped to deal with poachers in the ongoing war to save rhinos from extinction.

That’s the view of Heinz de Boer, the DA’s spokesperson for economic development, tourism and environmental affairs after news that seven white rhino carcasses had been found in the Hluhluwe-Imfolozi Park.

The animals were killed between November 16 and 23, bringing the total number of rhinos poached this year to 88.

The first carcass was discovered on November 16 in the park’s Nqumeni section and was believed to be about three days old. A day later, another carcass was found in Nqumeni. It was estimated to be over six months old.

“The entity [KZN Ezemvelo Wildlife] does own several hundred firearms but many of these are old.”
Heinz de Boer, the DA’s spokesperson for economic development, tourism and environmental affairs

On November 21, park rangers found the body of a rhino in the Masinda section. It was less than 24 hours old. More carcasses were found on November 22 and 23 in the Makhamisa section.

De Boer said the vast amount of poaching, which has taken place in South Africa in the past 20 years, has so desensitised people that they don’t appreciate the massive battle being waged every day in the bush. “It’s a very clandestine war. It’s a war between provincial authorities and national authorities and what is essentially a very, very organised criminal network with some very well connected, we believe, individuals who are running those networks and who are directly linked to international role players in the trade of both ivory and rhino horn,” he added.

“We don’t have enough park rangers and anti-poaching staff and now, with the provincial budget being cut for salaries for at least R5 billion, I don’t think there is going to be any fiscal means to employ more park rangers, which is seriously, seriously concerning.”

“We must all appreciate the importance of conservation and its value to our tourism sector — a major job creator.”
Ravi Pillay, MEC for economic development, tourism and environmental affairs in KwaZulu-Natal

De Boer said it was also unacceptable that rangers were being asked to fight poachers without adequate fire power.

“The entity [KZN Ezemvelo Wildlife] does own several hundred firearms but many of these are old,” he added. “There is still an outstanding order of firearms which hasn’t been completed.”

Staff also have to contend with broken fences and, in the case of Hluhluwe-iMfolozi Park, a road running straight through reserve which provides poachers with easy access.

ALSO READ: KZN reserve releases rhinos back into the wild

Ravi Pillay, the new MEC for economic development, tourism and environmental affairs in KwaZulu-Natal said he was concerned that rhino poaching was continuing at such a large scale.

“We must all appreciate the importance of conservation and its value to our tourism sector — a major job creator,” he said.

“I will shortly be meeting the sector to better understand their challenges and consider possible interventions.

“We thank our personnel at Ezemvelo KZN Wildlife who, together with law enforcement agencies and conservationists, work tirelessly under dangerous conditions to protect our wildlife,” he said.

We live in a world where facts and fiction get blurred
In times of uncertainty you need journalism you can trust. For only R75 per month, you have access to a world of in-depth analyses, investigative journalism, top opinions and a range of features. Journalism strengthens democracy. Invest in the future today.
Subscribe to News24
Related Links
Pietermaritzburg court grants bail in rhino horn case
State says no to bail for Margate man in rhino horn arrest
Ban ‘is hurting rhinos’
Next on Witness
KZN Premier Sihle Zikalala heckled by angry councillors