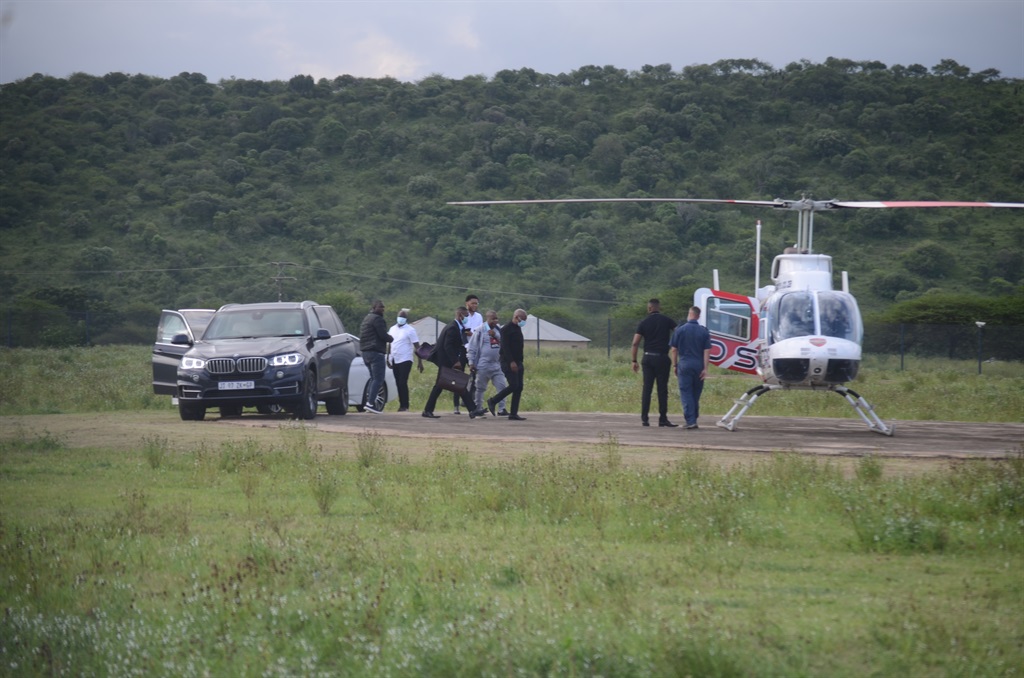 Malema and his team go to the chopper after their meeting with Zuma.
Jabulani Langa

The discussions between former President Jacob Zuma and EFF leader Julius Malema in Nkandla were by late on Friday still a subject of speculation.

Both Zuma and Malema declined to divulge what was discussed at their “tea” meeting held at the former president’s homestead.

All those attending the meeting have previously expressed unhappiness about President Cyril Ramaphosa’s leadership.

Zuma and Malema surprised the nation when they tagged each other on Twitter on Wednesday to organise a meeting over tea.

ALSO READ: Ramaphosa: Zuma could yet be persuaded to change his mind about Zondo Commission

They didn’t say what the meeting would be about, but they are expected to air common grievances in the meeting.

Zuma this week became the centre of controversy again when he said in a statement that he would disregard an order by the Constitutional Court to appear before the Zondo commission of inquiry into state capture because he had an issue with how it was constituted.

In a statement, the EFF said although Zuma’s defiance of the Constitutional Court was “misguided”, it felt that the commission was a “factional instrument” devised by Ramaphosa to protect “capitalist money”.

Malema, who Zuma hailed as a possible future president of the country when Malema supported his rise to power in 2007, subsequently became one of the most vocal campaigners for Zuma’s expulsion from the Presidency. The meeting seems to signal that the two could be finding common ground again.

Several witnesses had implicated him in state capture and corruption. Zuma, who made a few appearances before the commission in 2019 and last year, believes that the commission was biased against him.

Should he not appear before the commission on February 15 as requested by the commission, Zuma risks being arrested for contempt of court.

However, some political analysts believe that arresting Zuma, who still has a large following, particularly in his home province of KwaZulu-Natal, could lead to violent demonstrations.

Sources close to Malema said the EFF leader’s trip to Nkandla on Friday was part of efforts to convince Zuma to change his mind on his decision not to appear before the commission.

We live in a world where facts and fiction get blurred
In times of uncertainty you need journalism you can trust. For only R75 per month, you have access to a world of in-depth analyses, investigative journalism, top opinions and a range of features. Journalism strengthens democracy. Invest in the future today.
Subscribe to News24
Related Links
Our viewpoint | Ramaphosa must act on the madness
Malema and Zuma’s tea date has people talking
Letters | Zuma is running away from himself, the truth, the country
Next on Witness
Another Pietermaritzburg substation explodes

Read more on:
anceffdali mpofutony yengenifloyd shivambunkandlakwazulu-natal
Daily Poll
The proposed amendments in the racing and gambling sector Bill in KZN have received strong opposition. Do you take part in gambling or betting?
Please select an option Oops! Something went wrong, please try again later.
Yes, I do
8% - 16 votes
The most I ever do is take a lottery ticket
46% - 87 votes
I’m dead against it. I will never gamble or bet
23% - 44 votes
I’m too broke to gamble
23% - 44 votes
Previous Results