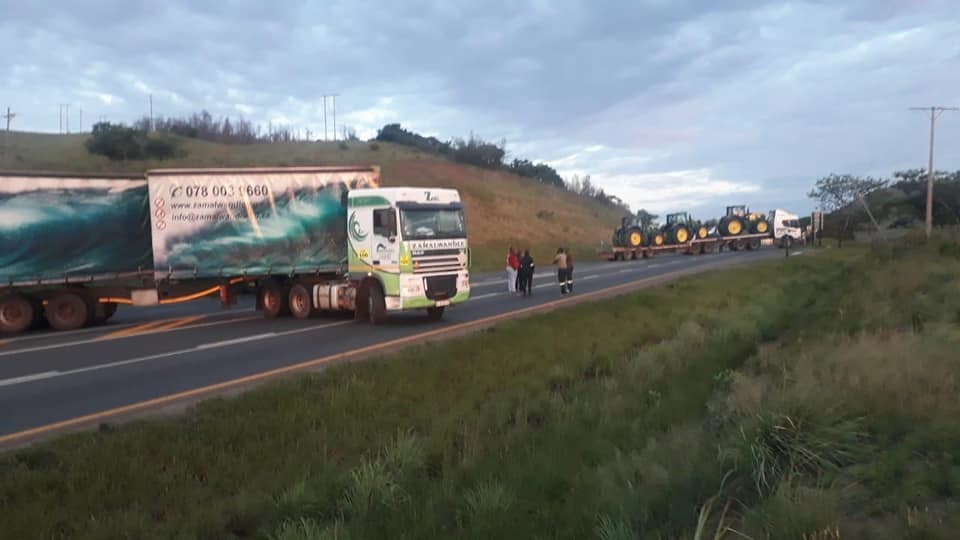 PEC Transport is among the trucks that are stuck in the blockade along Van Reenen's Pass, which has brought all traffic along the N3 to an abrupt stop on Friday morning.

Trucks can be seen stuck along the stretch of the mountain pass, reports Claudine Senekal of the  Ladysmith Herald

PEC Transport told the Ladysmith Herald, that their truck driver was pulled over by armed men and pulled from the truck. "He was told to get out and the keys to the truck were taken," said an official from PEC Transport. The company further added that over R12.7 million worth of cargo is sitting in the traffic.

"The cargo of tractors were supposed to be delivered to clients today."

PEC Transport further added that they are extremely worried about their driver, who is in utter shock and petrified that something will happen to him and the cargo.

"Our driver, who is a South African said that other drivers around him are just as worried about their safety, but cannot say why the road is closed."

The Road Freight Association (RFA) has hit back at authorities who are monitoring the N3 after it was blockaded at Van Reenens Pass on Friday morning.

Gavin Kelly, the Chief Executive Officer of the RFA said once again, "the transport and logistics industry is being held captive by those who prefer to work outside the law".

"The vital N3 route between the Port of Durban and the interior has been blocked - again. Violence and looting has occurred according to some reports - whilst individuals have taken the law into their own hands to pull drivers from trucks to check their personal documents. The reports are that the SA Police Service (SAPS) is "monitoring the situation".

"Law abiding transporters are subjected to this. The RFA has called on Government again and again to do what is necessary. They must deal with those who see themselves above the law - arrest, detain and investigate the inciters, those who perpetrate these acts, and those who take it upon themselves to act like police or authorities of the State."

He said those employers who continue to break the law, are not registered with the various authorities as required by various legislative prescripts or continue to employ individuals at rates below the minimums, must be dealt with.

"The SAPS must intervene and take action - not stand on the sideline and 'monitor'. We are fast losing any respect as a safe, efficient and desirable route for the movement of goods out of, and into, Africa - and even South Africa)."

Motorists have been advised to delay their travel on the N3 at Van Reenen until further notice after truck blockade there on Friday morning.

A group of protesters have used trucks to block all the lanes of the highway. According to the N3 Toll Concession, an extensive backlog of traffic is already being reported in the area. It is said as a result, the Tugela Toll Plaza is now also closed in a northbound direction (towards Gauteng).

“Law enforcement is on scene to monitor the situation. Road users are advised to delay travel to the area until further notice,” it said.

The KwaZulu-Natal provincial police spokesperson Brigadier Jay Naicker confirmed the blockade and said the road was blocked by truck drivers. Naicker said it is alleged that the truck drivers parked their vehicles on the road and in most cases, they removed the keys from the trucks. “At this stage the SAPS is at the scene and attempts  are being made to remove these trucks. We advise people to avoid traveling in that area as traffic is currently being diverted to alternative routes,” he said.

Daily Poll
What are your thoughts on youngsters taking a gap year after completing matric?
Please select an option Oops! Something went wrong, please try again later.
Great idea, especially if they’re not sure what to study
17% - 1 votes
I’m against this. It’s a waste of a year
17% - 1 votes
Few people can afford this luxury
67% - 4 votes
Previous Results