Outrage over increased attacks on paramedics 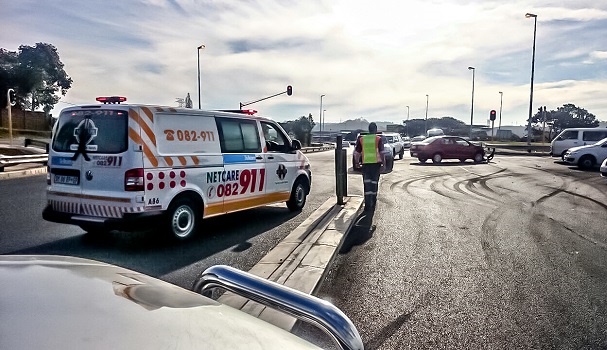 ER24 spokesperson said there have been three attacks on ER24 paramedics this year.
File

Pietermaritzburg - Following the vicious attack on three ER24 paramedics in Pietermaritzburg on Saturday, ambulance services have expressed outrage at the increased attacks on crew members.

ER24 paramedics were transporting two patients from a vehicle collision on Saturday night when they came across another accident on Manning Avenue.

The crew stopped to assess the incident, and were verbally assaulted by four men involved in the second accident.

One of the men then stabbed a paramedic in the face and hand, and punched him in the head while wearing a knuckle duster.

The attacker then tried to hit the injured paramedic with a brick, before a crew member tackled and disarmed him.

Four men were arrested by Mountain Rise police at the scene for intent to do grievous bodily harm, as well as driving under the influence.

Netcare911 spokesperson Chris Botha said the number of attacks on paramedics was increasing.

He said he had been attacked three times this year while trying to assist those injured in protests.

“I have had a petrol bomb thrown through the window of the Netcare911 rapid response vehicle and two other attacks while trying to help people who had been hurt during riots.

“How do we go in and treat people when we also have to worry about the crew’s safety all the time?

“The attacks on paramedics have increased and it is horrifying. Paramedics need to be careful wherever they go,” said Botha.

ER24 spokesperson Chitra Bodasing Harduth said there had been three attacks on ER24 paramedics this year, and 15 over the last two years throughout the country.

“Attacks on EMS [emergency medical services] personnel have been going on for a long time,” said Bodasing Harduth.

“Crimes committed against them started increasing a few years ago and attacks on our staff as well as all EMS personnel in general is of great concern.

“As EMS, their aim is to save as many lives as possible and it is shocking that the very same people who are dedicated to saving lives now find their lives at risk,” she said.

Bodasing Harduth said ER24 launched the Emergency Medical Support in Hostile Environments course in 2011 to address the spike in attacks on paramedics.

“This course is directly targeted at addressing concerns relating to violent crimes committed against EMS personnel,” she said.

“We teach our staff various skills, such as identifying hostile environments, how to deal with these situations and, if the need arises, how to defend themselves and the patient.”

She said they had launched an advanced course in 2014.

KwaZulu-Natal EMS spokesperson Robert McKenzie said the increase in attacks on paramedics had been experienced nationwide, with many of the assaults happening in the Western Cape.

“Attacks are a constant threat and we ask the community to safeguard EMS staff and respect their lifesaving work,” he said.

We live in a world where facts and fiction get blurred
In times of uncertainty you need journalism you can trust. For only R75 per month, you have access to a world of in-depth analyses, investigative journalism, top opinions and a range of features. Journalism strengthens democracy. Invest in the future today.
Subscribe to News24
Related Links
Berserk drunk stabs paramedic
Man shot in car in Joburg CBD
Driver rescued from burning cooking oil truck
Next on Witness
Proposal not to give some healthcare workers vaccines

Read more on:
pietermaritzburgaccidentscrime
Daily Poll
With various upsets from Eskom and municipalities disrupting our electricity supply, have you taken measures to make sure you have a power supply when the lights go off?
Please select an option Oops! Something went wrong, please try again later.
No
52% - 48 votes
Yes, I bought a generator
19% - 18 votes
Yes, I installed a battery backup system
20% - 19 votes
Yes, I've installed solar power
9% - 8 votes
Previous Results
Latest Issue