“The nights were very long and I didn’t get any sleep, but if I can co-exist with these animals in a 6x2m enclosure, how much easier is it for us to co-exist with them out in the wild? We don’t need to kill them.”

This is according to Dingo Dinkelman, a South African conservationist and world-famous YouTube sensation, who he spent five nights with 16 deadly reptiles in a 6x2m ‘Cage of Death’. He did this to show his global audience that these animals are not the monsters they’re often portrayed to be.

“I didn’t actually sleep any of the nights, you’re just too on edge, especially when you’re deprived of sleep and your mind doesn’t work as quickly,” he said.

“It was an incredible experience and a successful series. I really think we achieved what we set out to do – show that these animals don’t intend to harm us if left alone. There’s absolutely no reason to kill them.” The five-part series, which can be viewed on Dinkelman’s YouTube channel, began in July. New episodes are put up on the channel on Wednesdays.

For each episode, Dinkelman spent 12 hours from 5pm to 5am hanging out with a selection of the world’s most feared reptiles in the Cage of Death. This custom-built enclosure, created by Conrite Walls, ensured there was no escape for the death-defying Dinkelman.

In each session, Dinkelman chats about the species, explains the behaviour and shares insights into why they do what they do.

For his first roommate, Dinkelman chose the planet’s most dangerous crocodilian, the Nile crocodile. A primarily nocturnal being, Dingo was in for a night of bumps and constant disruption as she wandered around the enclosure on her night-time walks.

“She went for me in the beginning, but the rest of the night she actually got quite chilled out. But she didn’t stop walking around underneath my hammock, bumping into me every time!”

“I had an incredible encounter with the reticulated python. She climbed onto my bed and came right over my back and just perched on my head for a while. It was an incredible way to experience animals, you get to know how they react and move. Each animal has its own unique personality.”

Dingo’s serpentine sleep mates continued in the third episode where he spent a very alert night on the lookout for rattle snakes. 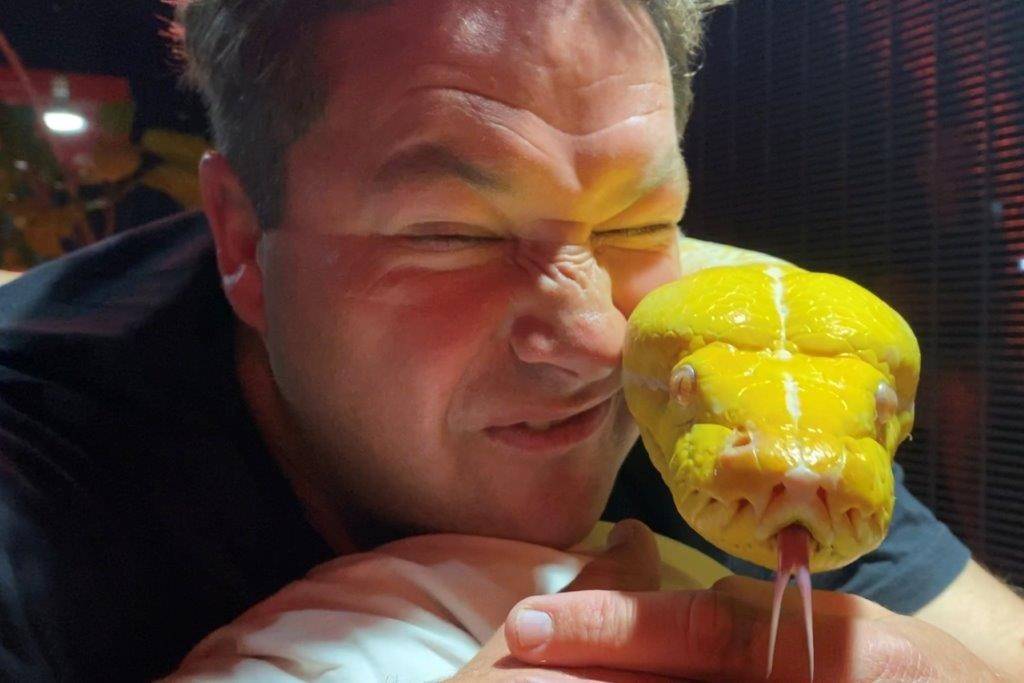 “This was a tricky one because they’re smaller than a crocodile, python or anaconda and there were four of them in the enclosure. It’s quite difficult to keep track of where they all are at any one time. They were under my bed, cruising all over the show, but they didn’t show any aggression. The night went by pretty easily.”

For Dingo, the fourth night with five-metre Thor the king cobra was a highlight.

“He was particularly feisty that night and went for me a few times. In the start, he went between my legs, put his hood up and gave me a bit of a fright. During the night, he perched on my table right next to my bed and spent the entire night right by my arm, with his tail sometimes draped on my bed, checking how things are going. Every time I went near him his hood went up and opened his mouth, but it was a really cool encounter.”

For the fifth and final adventure the heat was turned up with a new mamba added to the Cage of Death every two hours from 5pm to 3am. By the end of the night, a wide-awake Dingo was hanging out with two black mambas, a Jameson’s mamba, a West African green mamba, and two home grown green mambas.

“That was by far the most nerve-wracking night. I had about three different snakes strike at me in the beginning, but during the night they were cruising around under my bed. If they saw me move, the black mambas would open their mouths, but it was very successful overall.”

We live in a world where facts and fiction get blurred
In times of uncertainty you need journalism you can trust. For only R75 per month, you have access to a world of in-depth analyses, investigative journalism, top opinions and a range of features. Journalism strengthens democracy. Invest in the future today.
Subscribe to News24
Next on Witness
Granny chases off robber with saucepan in Phoenix, KZN

Read more on:
dingo dinkelmandurbankznpietermaritzburgsouth africakwazulu-natalcobraspythonssnakesreptiles
Daily Poll
Do you agree with the ConCourt’s ruling that unmarried fathers have the right to register their children under their surname?
Please select an option Oops! Something went wrong, please try again later.
Yes, it’s his children too
80% - 4 votes
No, it’s traditionally wrong
20% - 1 votes
Previous Results