15 prisoners still at large after escaping from Pietermaritzburg last week 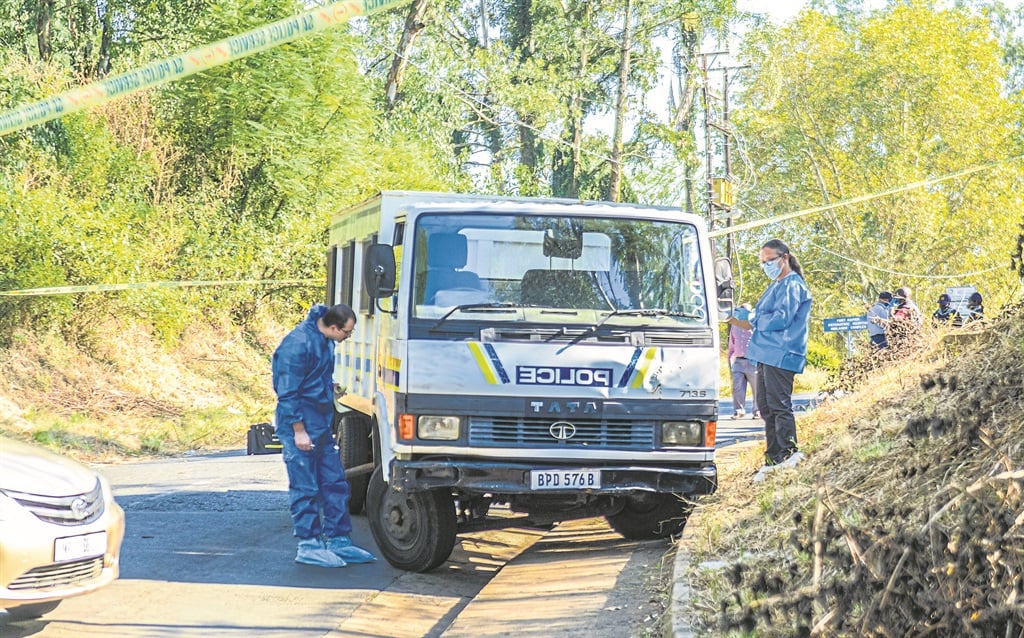 Forensic officers dust the police van that came under attack for fingerprints. The vehicle had been transporting awaiting-trial prisoners from New Prison to the Pietermaritzburg Magistrate’s Court when it was forced off the road.
Moeketsi Mamane

Fifteen prisoners remain at large after they escaped from a police truck in Pietermaritzburg last Wednesday.

Police spokesperson Brigadier Jay Naicker yesterday urged the public of Pietermaritzburg and its surrounding areas to remain vigilant and contact their nearest police station should they come across any of the awaiting trial prisoners.

Forty-five prisoners were being transported to the Pietermaritzburg Magistrate's Court last Wednesday when five heavily armed men approached the police vehicle and forced officers to open the vehicle. Thirty-one prisoners then made a run for it and since then 16 prisoners have been re-arrested.

The latest prisoner to be caught was 19-year-old Thubelihle Dlomo, who was caught on Friday in the KwaDukuza area.

Of the men still on the run, five are murder accused and there is an alleged rapist. Naicker asked that anyone who spots any of the prisoners call their local police immediately or Crime Stop on 086 001 0111.

We live in a world where facts and fiction get blurred
In times of uncertainty you need journalism you can trust. For only R75 per month, you have access to a world of in-depth analyses, investigative journalism, top opinions and a range of features. Journalism strengthens democracy. Invest in the future today.
Subscribe to News24
Related Links
One escaped prisoner down, 15 more to go
WANTED | Police release names and pictures of prisoners who escaped in Pietermaritzburg, KZN
Eyewitness says seeing escaping prisoners was like watching a bioscope movie
Next on Witness
Four people shot dead in Richmond, KwaZulu-Natal