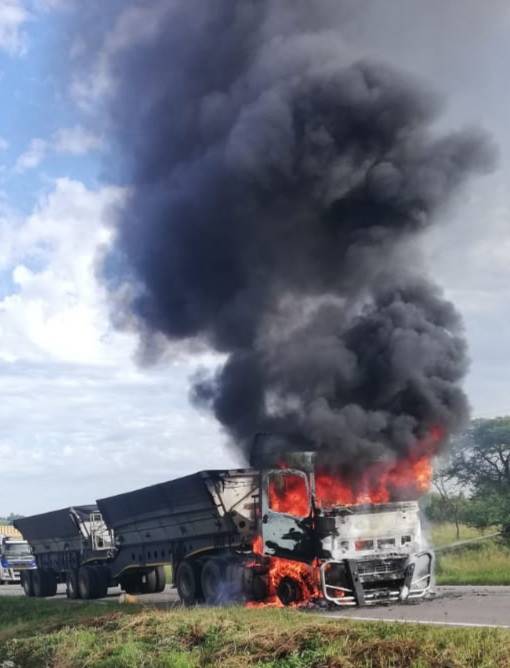 Witnesses said the exploding tyres on a truck, which caught fire, sounded like hand grenades.

Traffic on the N3 southbound, near Ashburton and the Lion Park Bridge, was on Sunday morning disrupted as emergency services dealt with the blaze.

The driver managed to escape from the burning truck, but reportedly lost R4 000 in cash, his ID book, passport and bank cards.

The cause of the blaze is not yet known, but sources told The Witness it could have been caused by the brakes overheating. A burning truck caused traffic delays on the N3 earlier today.
We live in a world where facts and fiction get blurred
In times of uncertainty you need journalism you can trust. For only R75 per month, you have access to a world of in-depth analyses, investigative journalism, top opinions and a range of features. Journalism strengthens democracy. Invest in the future today.
Subscribe to News24
Related Links
Truck with toxic load catches fire
Four dead as police open fire on crowd of looters
Eight hurt as taxi smashes into fire truck
Next on Witness
DA members in Pietermaritzburg criticise decision to replace party loyalist with ANC defector as councillor candidate

Read more on:
kznpietermaritzburgkwazulu-nataltruck accident
Daily Poll
Do you agree with the ConCourt’s ruling that unmarried fathers have the right to register their children under their surname?
Please select an option Oops! Something went wrong, please try again later.
Yes, it’s his children too
71% - 29 votes
No, it’s traditionally wrong
29% - 12 votes
Previous Results