Dozens of Jika Joe residents can rebuild homes at last 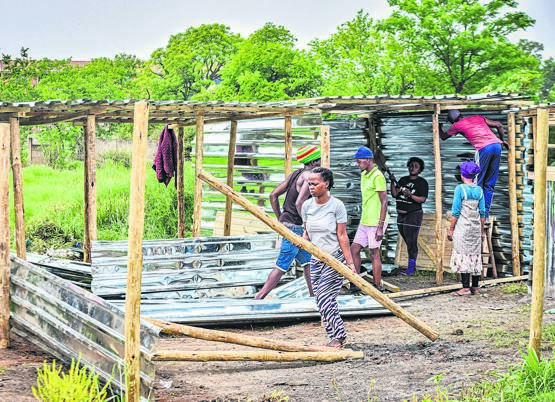 Dozens of Jika Joe residents who have been living in shelters for almost two months are finally rebuilding their homes after receiving material worth about R8 000 each from the provincial government.

These were the victims of the September shack fire that left hundreds homeless with many ending up in the shelters that were provided by the municipality.

Father of three Jeffrey Dlomo was among those who lived in the homeless shelter in Mayor’s Walk. He said he was happy yesterday to be back in the place he was familiar with and being reunited with his children.

“Most of us are basically starting from scratch because we lost everything in the fire, so it’s hard.”
Jeffrey Dlomo, affected Jika Joe resident

“I left my children with the neighbours because I couldn’t bear the thought of them being at the shelters. I also wanted them to be close to their friends and school,” he said.

Dlomo, who makes a living from piecemeal jobs and recycling, said he would be back on the streets today looking for recyclables that he could sell so that he could get money to buy second-hand furniture and other household items.

“Most of us are basically starting from scratch because we lost everything in the fire, so it’s hard,” he said.

The councillor for the ward, Suraya Reddy, said the building material for the 89 residents was provided by the provincial Department of Human Settlement.

“They only gave those who had been staying at the shelters because it became clear that they were desperate for help and had no alternative, she said.

“I must say that of the seven fires that we’ve had in Jika Joe since my appointment as councillor a year ago, this was the most severe and co-ordinating the help was very hard because we were dealing with a large group of victims.”
Suraya Reddy, councillor for the ward

“Initially we had a lot more people at the hall but many of them got scared and left after one of them tested positive for Covid-19, but the rest really had nowhere to go,” said Reddy.

She said being at the shelters for almost two months was frustrating for both the residents and those trying to help because they had to rely on private donations for food and toiletries. They also had to seek donations for school uniforms and baby formula.

“I must say that of the seven fires that we’ve had in Jika Joe since my appointment as councillor a year ago, this was the most severe and co-ordinating the help was very hard because we were dealing with a large group of victims,” said Reddy.

Reddy commended the individuals and businesses who assisted the fire victims, especially her colleagues, Themba Njilo and Mehmood Oumar, who are both ANC councillors but donated in their personal capacities as businessmen. She said the pair did not care that Jika Joe was in a DA-led ward and they dug into their own pockets to help those affected with food, mattresses and anything else that was needed.

We live in a world where facts and fiction get blurred
In times of uncertainty you need journalism you can trust. For only R75 per month, you have access to a world of in-depth analyses, investigative journalism, top opinions and a range of features. Journalism strengthens democracy. Invest in the future today.
Subscribe to News24
Related Links
Builders of Jika Joe flats now armed with interdict to block illegal invasions
Pietermaritzburg shack fire victims quarantined
Jika Joe shack fire victims face multiple problems over loss of identity documents
Next on Witness
WATCH | Disgruntled Coin-it investors demand liquidators to release their funds

Read more on:
jika joepietermaritzburgkwazulu-natalcovid-19
Daily Poll
Do you know who the ward councillor in your area is?
Please select an option Oops! Something went wrong, please try again later.
Yes
41% - 51 votes
No
59% - 72 votes
Previous Results