Emergency workers rescuing a man after he slipped and fell off a cliff at the Howick Falls.PHOTO:

A 38-year-old is lucky to be alive after he slipped and fell off a cliff at the Howick Falls, in KwaZulu-Natal, on Wednesday morning.

ER24 spokesperson, Ross Campbell, said the man fell approximately 40 meters from the viewing platform at Howick Falls at around 2 am on Wednesday morning.

Mark Winterboer, director of Midlands EMS, told The Witness that it is believed that the man was running from people who reportedly wanted to kill him.

“When he got to the Falls he thought the only way out was over, so he jumped over the side with the bushes and he went down. We think he got stuck in the trees and branches and that’s how he survived the fall,” said Winterboer. Emergency workers rescuing a after he slipped and fell off a cliff at the Howick Falls.PHOTO: 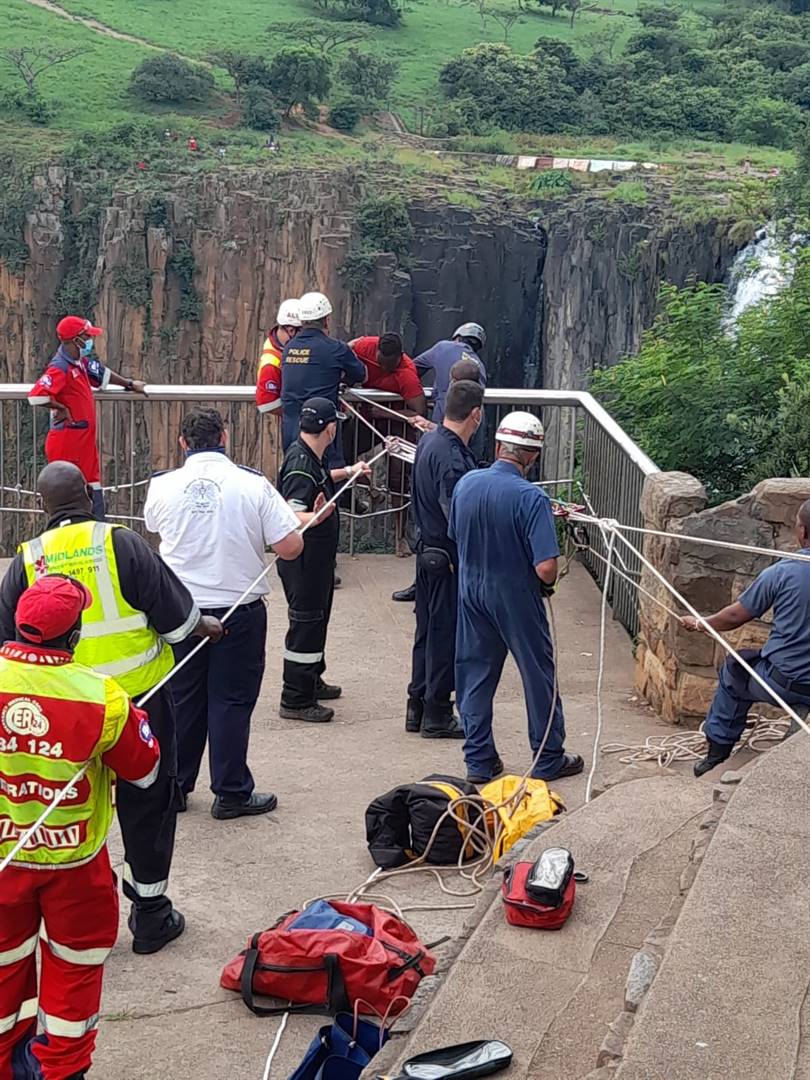 Emergency workers rescuing a man after he slipped and fell off a cliff at the Howick Falls.PHOTO:

He said emergency workers, who consisted of the SAPS search and rescue team, Midlands EMS and ER24, set up a rope system and went over to rescue the man and pulled him back up.

“He sustained a couple of scratches and abrasions to his leg. He didn’t appear to have had any broken bones and he is currently stable.”

Campbell said an ER24 medic suited up in his harness while SAPS cordoned off the area to the 30 or so bystanders.

"The SAPS Search & Rescue team then arrived and set up a rope system. As our medic was already suited up, they decided to lower him down to the patient to save time. The patient was assessed and found to have only suffered minor injuries. He was then attached to the medic's harness via a sling and both were lifted back up to the platform just before 8 am. He was transported to Northdale hospital by the other private emergency service on the scene for further care," said Campbell.

After being stabilised, Winterboer said the man was taken to Northdale hospital.

We live in a world where facts and fiction get blurred
In times of uncertainty you need journalism you can trust. For only R75 per month, you have access to a world of in-depth analyses, investigative journalism, top opinions and a range of features. Journalism strengthens democracy. Invest in the future today.
Subscribe to News24
Next on Witness
Two DUT students shot and injured during protests in Pietermaritzburg

Read more on:
policesapser24pietermaritzburghowickkwazulu-natalkznrescueaccidentsearch and rescue
Daily Poll
Government has launched the Covid-19 vaccine online registration for the public as the Department of Health gears up for phase two of the country's vaccine rollout. Health Minister Dr Zweli Mkhize said the Electronic Vaccination Data System (EVDS) is now available to the general public and all citizens aged 60 years and above are invited to register for vaccination. Have you registered for the vaccine?
Please select an option Oops! Something went wrong, please try again later.
I have registered or have registered my loved ones who are over 60 years
27% - 4 votes
I first want to see how people react to the vaccine, then I’ll register
27% - 4 votes
I won’t be registering because I don’t want the vaccine
47% - 7 votes
Previous Results
Latest Issue