Treating people with dignity and love is what’s important, says Gift of the Givers founder 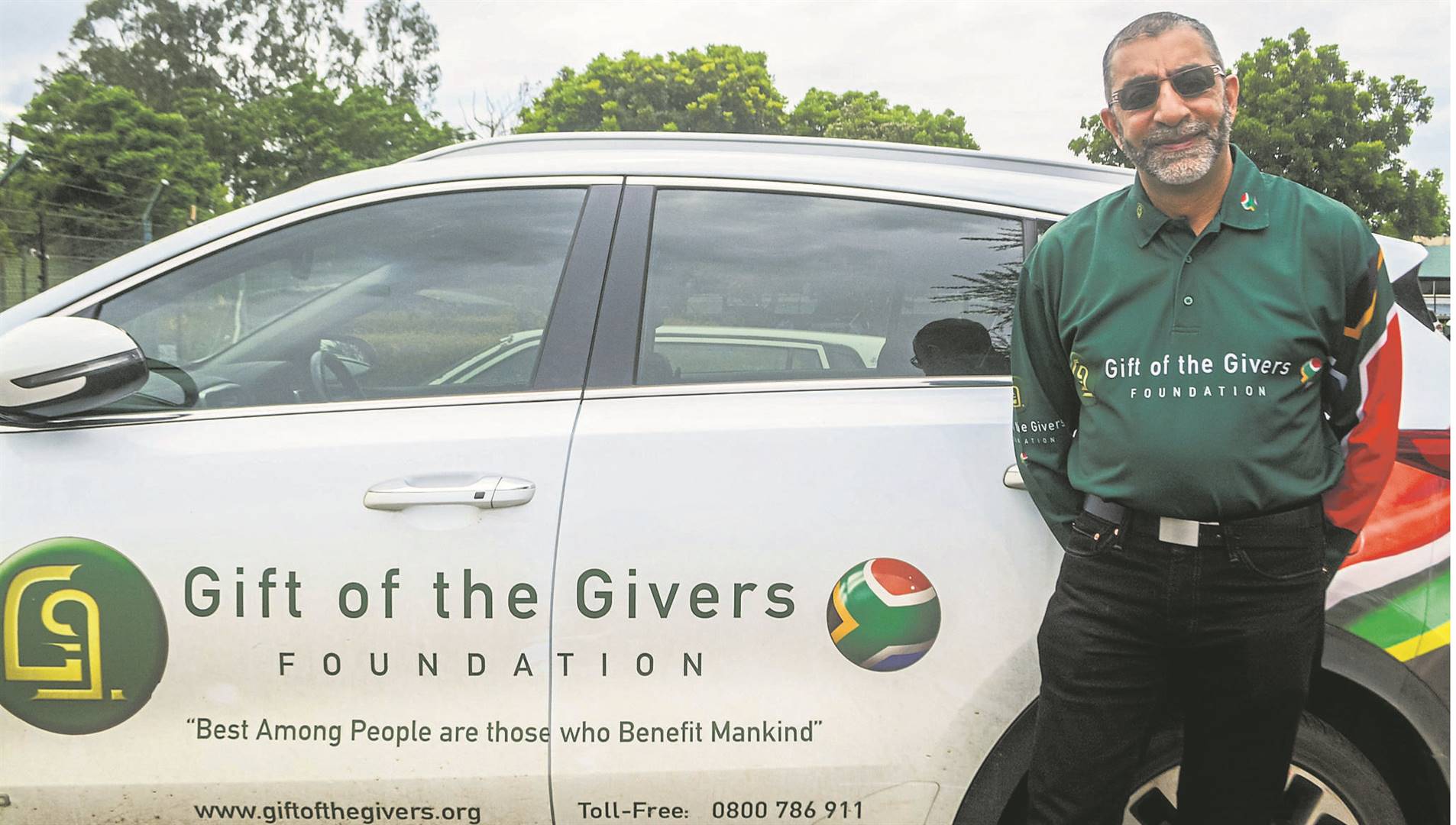 Founder of Gift of the Givers Foundation, Doctor Imtiaz Sooliman.

The Gift of the Givers founder, Doctor Imtiaz Sooliman, said it’s the simple things they do that often bring hope to people.

He said seeing the smiles, satisfaction and hope on people’s faces is what has kept him and his team going.

“It’s not even big things that we do; simple things bring people hope and you can see that they are extremely grateful,” said Sooliman.

Sooliman said every project they’ve done has been a memorable story. “Every place we’ve been to, people would say the green people have arrived and God answered their prayers. The contentment, gratitude and happiness you see on everyone’s face is always satisfying,” he said.

He added that another memorable moment was when they realised that farmers have faith in them. “When we were delivering food parcels to their workers, some of them would also ask for the parcels and that showed they trusted us and that we are approachable to people in need,” said Sooliman.

He said that the most important thing they’ve done as a foundation is to build relations across race and religion, create social-cohesion and treat people with dignity and love.

“It’s that kind of message that we want to get across, which is spirituality, promoting ethics, winning people’s hearts, giving them hope, providing them with dignity and making them feel they are not forgotten, but are loved and special,” he said.

He added that they’ve been to many places throughout the world and people have been happy to see them.

“We see people saying that if outsiders can come and help them then they can also help themselves.”
Gift of the Givers founder Imtiaz Sooliman

“You’d see there’s hope, and they get the sense that they are not forgotten,” said Sooliman.

He added that this is the kind of legacy they leave behind in the places they go to.

“We see people saying that if outsiders can come and help them then they can also help themselves,” he said narrating a story about a visit to the Philippines.

He said they went to an island where no one had been to help and people there had lost hope because their one hospital was being closed after being destroyed.

He said while they were busy fixing the hospital, people around them started fixing their homes as well.

Sooliman started Gift of the Givers Foundation in 1992 after receiving a spiritual message.

He gave up his career as a medical doctor when he couldn’t always be there for his patients.

“My wife closed the surgeries when I was oversees. She said it wasn’t working because the patients did not want to see anyone else,” he said.

He added, however, that he misses practising as a doctor and sometimes wants to work in hospitals but there is no time.

“I work 24/7 every day of the year. I don’t care about the holidays because sometimes even a small intervention can make a big difference to people,” he said, emphasising that he will never stop working for Gift of the Givers. “If I stop doing what I am doing, I’ll die faster.”

Sooliman said that creating Gift of the Givers was a spiritual instruction that he committed himself to and he will never turn back because he loves what he does.

“It’s so spiritually uplifting and soul satisfying. I believe me or my family could have been on the other side and I’d expect someone to help me,” he said.

Sooliman was recently presented with the Social Justice Champion Award from Professor Thuli Madonsela. He said having Madonsela passing the award to him was meaningful. “She stands for values, ethics, morality and social justice,” said Sooliman.

The University of KwaZulu-Natal, where he studied, also recognised him with an alumni award when the university was honouring its medical alumni legends. The idea was to celebrate the alumni while they are still alive.

“The business rescue project has helped save a number of jobs.”
Imtiaz Sooliman

Since the Covid-19 pandemic, Gift of the Givers has been helping people throughout the country.

Sooliman said that for the past two years, they’ve been supporting hospitals with personal protective equipment, Cpap machines and oxygen machines, among many other things.

Sooliman said whenever there’s a call for their services, they have to be available.

They’ve handed out over 500 000 food parcels since Covid-19 broke out and during the July unrest.

They also supported businesses that were hit during the unrest. “The business rescue project has helped save a number of jobs,” he said.

Sooliman said serving people fulfils his commitment to his spiritual teacher and that’s all he wants.

We live in a world where facts and fiction get blurred
In times of uncertainty you need journalism you can trust. For 14 free days, you can have access to a world of in-depth analyses, investigative journalism, top opinions and a range of features. Journalism strengthens democracy. Invest in the future today. Thereafter you will be billed R75 per month. You can cancel anytime and if you cancel within 14 days you won't be billed.
Subscribe to News24
Related Links
A ‘beautiful gesture’ as Maritzburg United offers to carry Gift of the Givers’ logo on team’s...
Gift of the Givers services the less fortunate on World Hunger Day
Gift of the Givers to help India deal with Covid-19 tragedy
Next on Witness
Blind graduate receives standing ovation at graduation

Read more on:
gift of the giversimtiaz soolimankwazulu-natalkznpietermaritzburgsouth africacovid-19charityfarmersfaithfood parcels
Daily Poll
Load shedding is a reality in South Africa with experts saying if the system fails, stage 8 cuts could be on the cards. What do you think can be done to end load shedding?
Please select an option Oops! Something went wrong, please try again later.
We can all try using less electricity
2% - 1 votes
Deal with the rot within Eskom
37% - 16 votes
Find alternative power sources outside Eskom
60% - 26 votes
Previous Results