‘Ramaphosa is not welcome at Nkandla’ 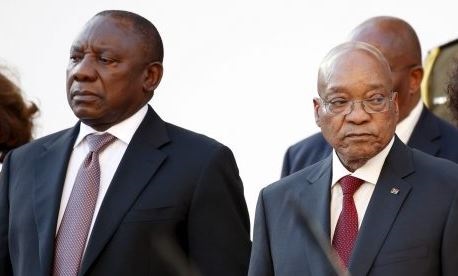 The planned meeting between the ANC national leadership and former president Jacob Zuma over his decision to boycott the Zondo commission proceedings has been shelved after Zuma “refused” to engage the party’s top brass on the matter.

There are also suggestions that President Cyril Ramaphosa himself would not be welcome at Zuma’s Nkandla homestead.

According to sources close to Zuma, Police Minister Bheki Cele, who visited the former president at Nkandla last week, was told by Zuma that no discussions around his decision not to go to the commission would take place.

Support independent journalism
Get 14 days free to read all our investigative and in-depth journalism. Thereafter you will be billed R75 per month. You can cancel anytime and if you cancel within 14 days you won't be billed.
Subscribe
Already a subscriber? Sign in
Next on Witness
WEATHER WARNING | Widespread rainfall, snow, and flooding expected in KZN and neighbouring provinces

Read more on:
radical economic transformationmkmvaretraymond zondojacob zumacyril ramaphosaace magashulesouth africakwazulu-natalnkandladefiancezondo commissionjail sentenceboycottconstitutional courtsstate capturecorruption
Daily Poll
Many countries that closed their borders due to the Covid-19 pandemic are now welcoming tourists again. Are you comfortable travelling to other countries yet?
Please select an option Oops! Something went wrong, please try again later.
I only travel for work
9% - 5 votes
Yes, I’m okay with travelling internationally now
55% - 32 votes
I don’t plan on travelling internationally until Covid is over
36% - 21 votes
Previous Results