SNAKE WARNING FOR KZN | People and dogs bitten - "There is no safe way to handle this snake!" 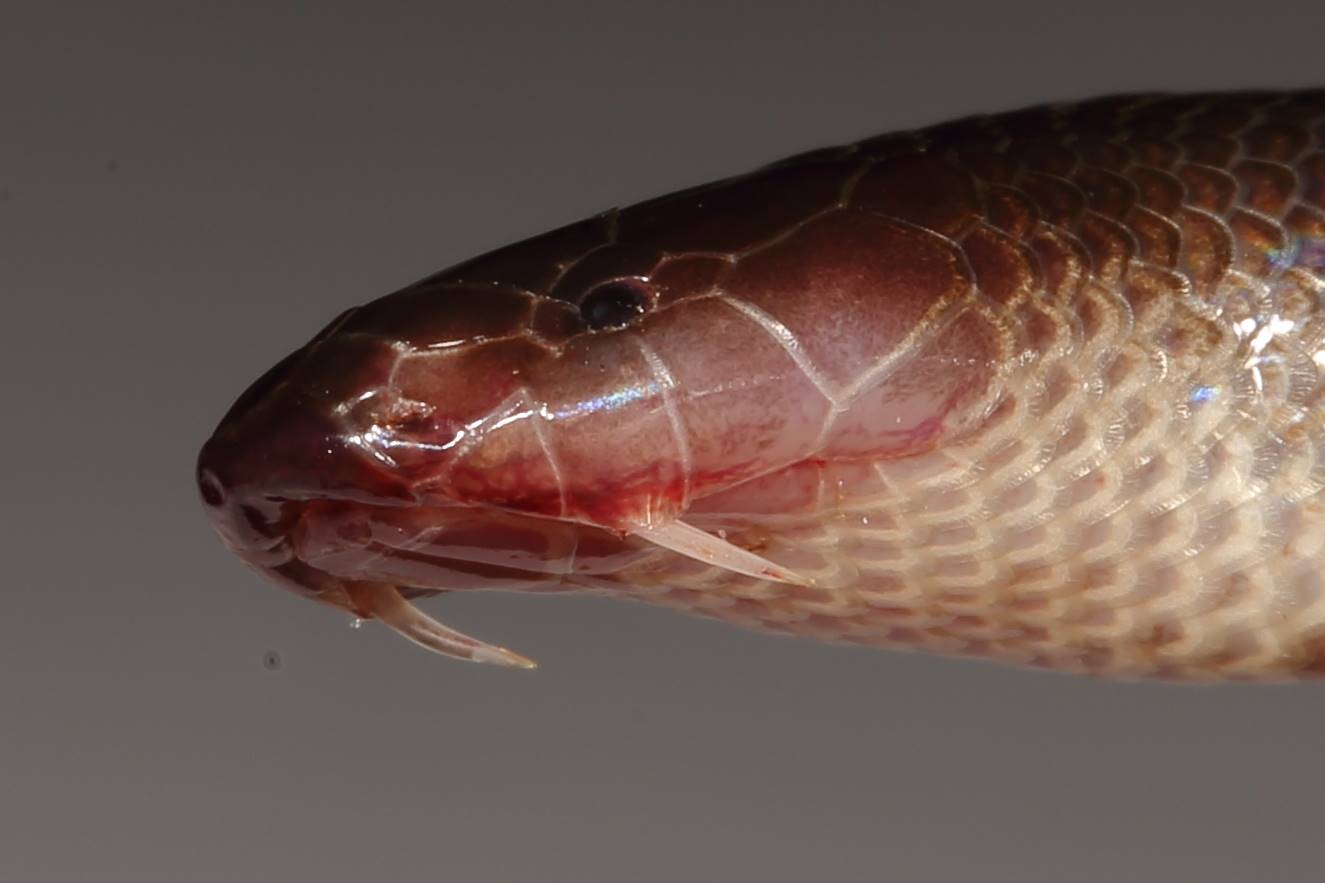 The side fangs of the Stiletto snake make it impossible to pick up safely. PHOTO: NICK EVANS
NICK EVANS

FOLLOWING the recent heavy rains and humid conditions across KwaZulu-Natal snake catchers are warning people not to be fooled by the innocent appearance of a slippery customer which is regularly being sighted – the venomous Bibron’s Stiletto snake.

Pietermaritzburg snake catcher, Pieter Potgieter told The Witness a dog was bitten by a Stiletto snake in the Ashburton area just two weeks ago but recovered after receiving veterinary treatment.

He said he was called out to identify the snake after the dog had killed the snake and was bitten by it. “The dog recovered well,” he said.

Stiletto snakes have two large fangs that stick out from the side of the mouth and experts say this makes it impossible to pick up the snake safely without getting bitten.

Durban snake expert, Nick Evans said both animal and human bites are not uncommon as people are often fooled into thinking they can pick up Stiletto snakes because of their size and appearance which makes people think they are likely harmless.

They are often mistaken for Mole snakes. He has recorded six human bites by Stiletto snakes in the past month alone and of these five were due to the people picking up the innocuous looking snakes which are dark brown and 30 to 40 cm long.

Evans said of the six bites he was referring to only one man was bitten while picking up a pile of leaves, while the others were all handled by people who did not appreciate the risk.

Stiletto snakes have a cytotoxic venom (tissue destroying) similar to that of puff adders but are not as venomous. People and pets that are bitten generally recover though some might suffer permanent injuries if they do not get immediate or correct treatment.

“There is no safe way to handle this snake!”

Potgieter told The Witness that even snake experts cannot grab these snakes and hold them around the neck.

In a Facebook post Evans said: “ To me, behaviour is the easiest way to ID them, as we have similar looking snakes to Stilettos.”

“Stilettos, if they feel threatened, arch their necks up, so their face is on the ground. They move in a twitchy way, swiping that head from side to side. That’s them striking, as their fangs protrude out the side of their mouths.”

“If left alone, it’s not a problem. They often disappear quickly. If you’re really concerned, call a snake-catcher”.

Describing Stiletto snakes in another Facebook post, Evans said it is a “non-descript brown to blackish snake with a similar-coloured belly or a white belly and for some strange reason people mistake it for a Mole snake. This snake spends most of its life underground but comes to the surface at night, especially after some good rain. Specimens often fall into swimming pools while juveniles may be brought into houses by cats.”

Potgieter said people who find snakes in their homes or on their properties in the Pietermaritzburg and surrounds are welcome to call him.

We live in a world where facts and fiction get blurred
In times of uncertainty you need journalism you can trust. For only R75 per month, you have access to a world of in-depth analyses, investigative journalism, top opinions and a range of features. Journalism strengthens democracy. Invest in the future today.
Subscribe to News24
Related Links
A snake catcher's ‘mamba’ rescue surprise
Escaped corn snake back with its owner (7)
Exotic snake surprises Howick couple
Next on Witness
KZN health to investigate Ivermectin overdoses in Pietermaritzburg

Read more on:
durbankznpietermaritzburgkwazulu-natalashburtonsnakesvenom
Daily Poll
We’re already a few days into 2021, how do you think this year will play out for you?
Please select an option Oops! Something went wrong, please try again later.
I think it’s going to be a good year
26% - 10 votes
I’ve already had a bad start to the year
13% - 5 votes
We’ll see as time goes, don’t want to jinx it
61% - 23 votes
Previous Results
Latest Issue