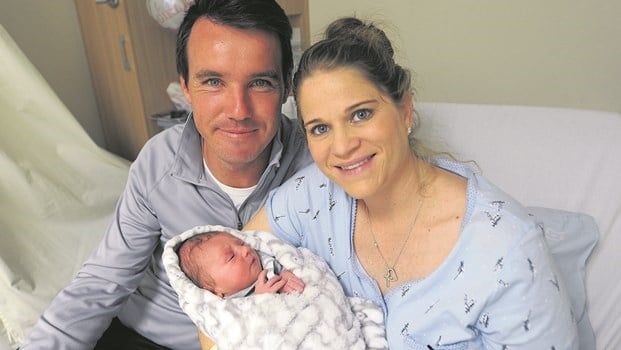 Kyle and Phillippa Nipper with baby Tenley Joy. They were the first couple to have their baby delivered at the Pietermaritzburg Mediclinic's Fertility Clinic on Friday.
Ian Carbutt

After struggling for almost two years to conceive, local couple Kyle and Phillippa Nipper joyfully welcomed their daughter into the world on Friday.

The baby, Tenley Joy Nipper, is the first to be born as a result of fertility treatment offered at the newly established Pietermaritzburg Fertility Clinic.

Kyle, a professional cricketer, said he was excited to be a father although he said everything still felt “a bit surreal”.

“I still have to wrap my head around it but it is such a blessing to have a beautiful, healthy baby,” he said.

Meanwhile, Phillippa, who is a primary schoolteacher at St Charles College, laughingly revealed that she will have to pay for the next family holiday after losing a bet with her husband about the baby’s gender. “I was convinced I was going to have a boy but for once I was wrong,” she said.

The Pietermaritzburg Fertility Clinic was opened one year ago in Burger Street by Dr Kasturi Moodley, who is also a gynaecologist at Mediclinic.

Moodley looked after Phillippa for the duration of the fertility treatments and her pregnancy.

Phillippa said she had been trying to fall pregnant for 18 months before the couple decided to contact the clinic.

The Nippers said they had tried Intrauterine insemination (IUI) a few times since July last year, and finally Phillippa fell pregnant in December.

“We were in shock and in a bit of disbelief. We kept it a secret from our family and friends until I was around 13 weeks pregnant and then we told our families.”

Phillippa said the whole thing was “quite a process” as she had to have fertility injections twice a day and scans every two days.

The couple thanked Dr Moodley and said she was their hero.

Moodley, who was visiting the Nippers when The Witness arrived, said the whole journey had been overwhelming and exciting.

“ I was there from the beginning of their journey right until the end and it is very exciting.

“This is our first successful birth as a result of the clinic so she is a very special baby, especially since she was born on the last day of Women’s Month,” she said.

We live in a world where facts and fiction get blurred
In times of uncertainty you need journalism you can trust. For only R75 per month, you have access to a world of in-depth analyses, investigative journalism, top opinions and a range of features. Journalism strengthens democracy. Invest in the future today.
Subscribe to News24
Related Links
Fertility clinic: Alarm system was off on failed embryo tank
Family files lawsuit over lost embryos at Ohio hospital
Next on Witness
IVERMECTIN | Drug boost for Covid patients

Read more on:
pietermaritzburg
Daily Poll
With compassionate use of Ivermectin now allowed, and news overnight that KwaZulu-Natal recorded 261 deaths in a day, do you think government should have moved faster to let doctors use the medication on ill patients?
Please select an option Oops! Something went wrong, please try again later.
No, they had to do their research first
0% - 0 votes
Yes, they had information available that it is reasonably safe
83% - 5 votes
I'm undecided
17% - 1 votes
Previous Results
Latest Issue