Thatched roof caves in over traders at Howick Falls 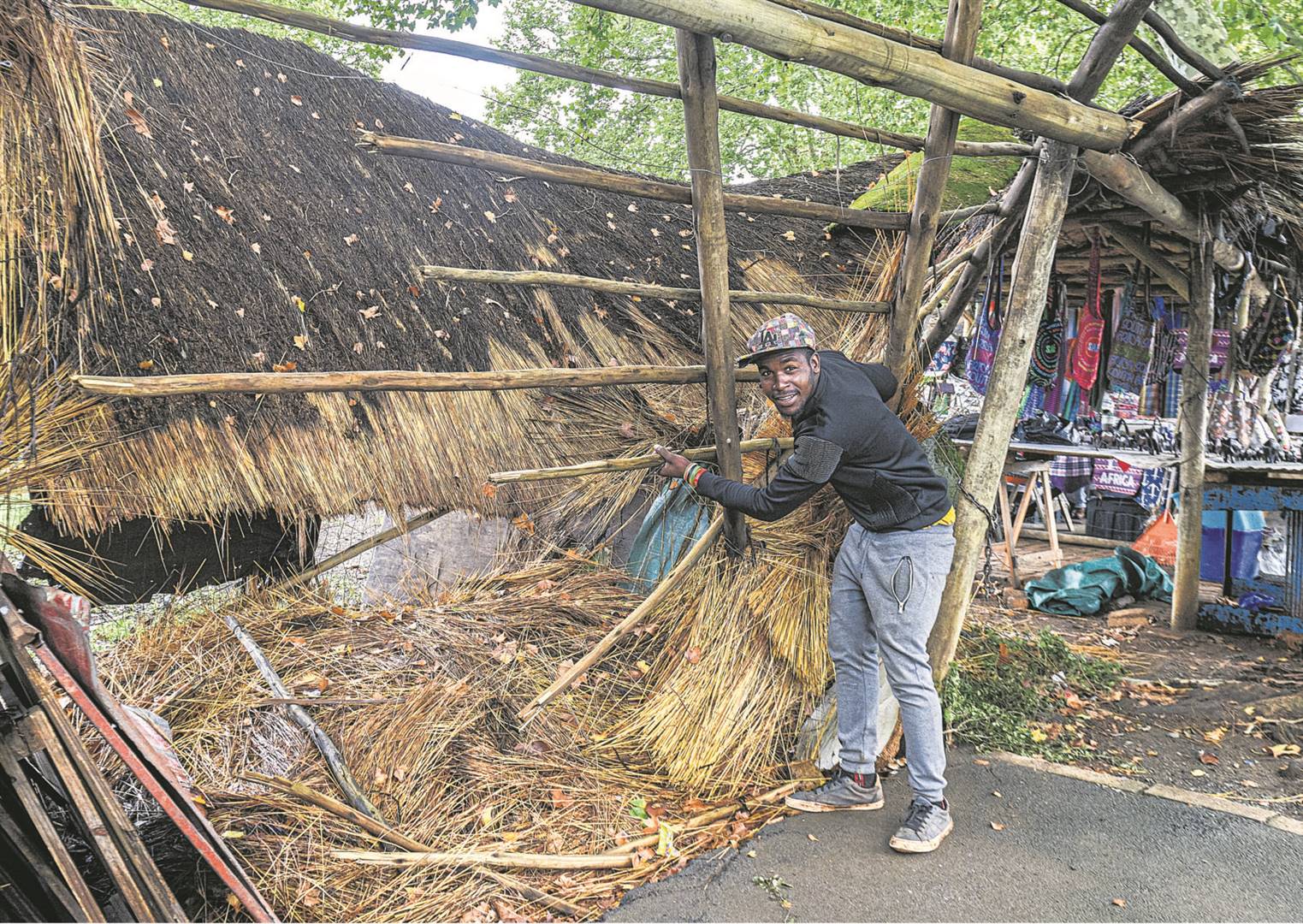 Siyabonga Sikakhane, a trader at Howick Falls, shows where a section of the thatched roof that shelters the traders’ wares had collapsed after recent storms, PHOTO: Moeketsi Mamane

Traders at Howick Falls have been dealt yet another blow, after a section of the thatched roof they trade under collapsed after recent heavy rain and winds in the area.

The rest of the thatch roof covering traders’ wares, which include bead work, bowls and sculptures, looks as if it may soon cave in too. The shelter is at the Falls near the Howick tourism office.

Traders are already experiencing trying times with the Howick Falls area facing serious degradation and tourists having been turned away in droves because of litter, crime and loud parties.

The traders’ stations are owned by the uMngeni Municipality, but the traders say they have had to spend their own money to repair some of the thatched roofing, and have erected some steel poles to prop up some parts.

They told The Witness the rest of the roof that covers their wares — which at one point was one of the prime attractions of the iconic tourism area — is also precarious.

The traders spend most of their day as the site, starting as early as 6 am and leave mid-afternoon every day.

“We put our stuff in front of the awning area now because it might fall down. But that means that we can’t trade when it rains because the stuff gets wet,” one trader said.

“It’s been looking like it’s going to fall for a long time, and municipality people are always here so they know what the situation is,” he said.

“Now we’ve had to pay R4 500 to repair some of the thatch roofing but can’t do any more because thatched roofing is expensive.”

Trader Siyabonga Sikakhane was around when the structure collapsed last week, and said no one was hurt.

“Luckily nothing was damaged because our stuff was not underneath the roof at the time.

“There have been bad rains and bad winds, and even when our stuff is under the roof it’s not really safe because a lot of [the thatched roofing] is off.”

The news coincides with the wider community this week vowing to take the revamp of the Falls precinct into their own hands because of inaction from the government.

The area’s councillor, Hazel Lake, said it was a shame that the municipality was not assisting the traders.

“The stalls are currently dangerous and not operational.

“There is a municipal mandate to look after local economic development and ensure our tourist areas are kept in good order … It is a disgrace,” she said.

uMngeni did not respond to a query by deadline on Thursday.

We live in a world where facts and fiction get blurred
In times of uncertainty you need journalism you can trust. For only R75 per month, you have access to a world of in-depth analyses, investigative journalism, top opinions and a range of features. Journalism strengthens democracy. Invest in the future today.
Subscribe to News24
Related Links
Plan to fix the Falls
Midmar mess ‘is a crime’
Big bucks for uMngeni municipal manager
Next on Witness
Mixed reactions to online registration system for Covid-19 vaccination

Read more on:
pietermaritzburg
Daily Poll
Recently, the police have come under fire for a spate of attacks on civilians, which in some instances has led to death. Police Minister Bheki Cele has said police brutality is ‘of serious concern’. What are your thoughts on the matter?
Please select an option Oops! Something went wrong, please try again later.
There may be a few bad apples but this is the exception not the rule
10% - 4 votes
I’m scared of the police and always try to stay clear of them
21% - 8 votes
Police training needs to be improved, so this doesn't happen and there must be consequences for abuse of power
69% - 27 votes
Previous Results
Latest Issue