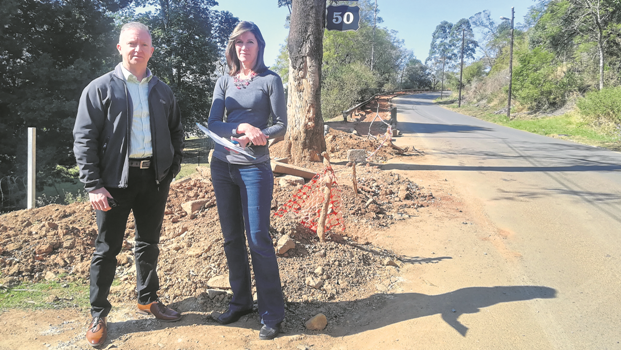 Rob Anderson (left) of Red Alert security and Sally Martins from the Shinglewood Estate on Link Road in Wembley. They are demanding answers from the municipality about the run-down condition of the road.
Kailene Pillay

Residents and business owners in Wembley have blamed the municipality for creating a high accident zone in their area. Trenches, believed to be for new water pipes, have been dug along both sides of Link Road in Wembley leaving no pedestrian pathway.

Speaking on behalf of the residents at the Shinglewood Estate, Sally Martins said the roadsides were dug up more than six months ago and no work had been conducted there since.

“The municipal workers are here every day but they just nap under the trees and tell us they are waiting for materials and parts to start work,” Martins said.

She confirmed that the municipality embarked on a water main replacement programme on Link Road but said it was not true that municipal workers were waiting for materials to continue work.

“They are not waiting for specific material. The water pipes have been installed in the area,” she said.

Mafumbatha said there was actual physical construction outstanding which required fabrication, installation and commissioning of the new infrastructure which will be undertaken within the next two months.

Residents and business owners said the deep trenches and boulders and sand left along the roadside have caused “a major problem” for drivers who are unable to judge the bend on the road.

“Just two or three Sundays ago, a driver hit into the tree just after the bend. They were lucky to walk away from that accident without serious injuries,” Martins said.

To make matters worse, the road, which is lined with trees, also has not had working street lights for months.

“There is no hazard tape or anything and it is one of our greatest concerns in the area. This road is probably one of the most neglected roads in the city. The trenches were dug up at the beginning of the year and just left like this,” Martins said.

Regional manager for Red Alert security company Rob Anderson said he often worries about the safety of his employees who have to walk from the nearby Victoria Country Club, where the taxis stop, to their offices in Link Road.

“Every morning and afternoon is a constant worry for us because they have no pavements to walk on. They are forced to walk on the road because of the trenches and boulders on the roadside,” Anderson said.

Mafumbatha said they would investigate the road safety concerns and have a planned maintenance plan in place for street lights to be repaired across the city. “Contractors have been appointed to deal with street lights,” she said.