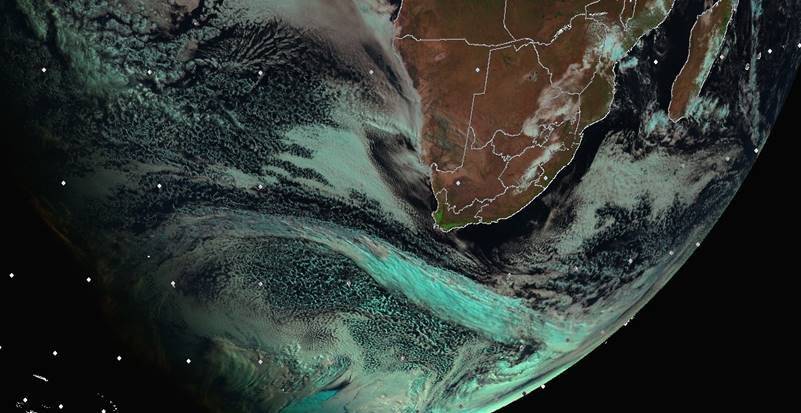 The South African Weather Service (Saws) has warned of two winter systems that will affect the country this week, with their impact extending into the weekend.

Firstly, an intense cold front will make landfall in the Western Cape early on Thursday morning spreading to the Eastern Cape during the afternoon as well as parts of KwaZulu-Natal in the evening.

Saws said rainy and very cold conditions with snow on the high-lying areas will set in over the Western Cape from on Thursday, progressing eastwards during the day.

A second system, a cut-off low, will develop during Friday over the western interior of the country, causing wintry conditions to persist over the southern parts of the country.

The system will also dump rain over the central interior of the country, a relatively uncommon occurrence for this time of year, said the weather service.

Widespread rainfall of 15 to 35mm is expected over the southern parts of the Western Cape and the south-western parts of the Eastern Cape. 24-hour accumulated rainfall of up to 40 to 50mm is also likely along coastal and adjacent mountainous regions of the eastern Garden Route District of the Western Cape and the south coast and adjacent interior of the Eastern Cape which may result in localised flooding of susceptible areas and roads.

The weather service said snowfall is also expected to spread to the Drakensberg regions of KwaZulu-Natal from Thursday night onwards.

“The good news is that weather conditions will generally start to improve over the Western Cape during Friday, while cold conditions can be expected to arrive over parts of Mpumalanga and southern Gauteng on this day,” said Saws.

The cut-off low pressure system is expected to exit the country on Sunday afternoon, allowing a spell of more settled, warmer weather to return during the following week.

The South African Weather Service said it will continue to monitor any further developments relating to this weather system and will issue subsequent updates as required.

We live in a world where facts and fiction get blurred
In times of uncertainty you need journalism you can trust. For only R75 per month, you have access to a world of in-depth analyses, investigative journalism, top opinions and a range of features. Journalism strengthens democracy. Invest in the future today.
Subscribe to News24
Next on Witness
Angry mob throws man off Howick Falls in KZN

Read more on:
kznpietermaritzburgsouth africakwazulu-nataldurbanweather forecastweather warning
Daily Poll
Do you agree that teenagers should be allowed to have Covid-19 vaccines without their parents’ consent?
Please select an option Oops! Something went wrong, please try again later.
Yes
49% - 46 votes
No
51% - 48 votes
Previous Results