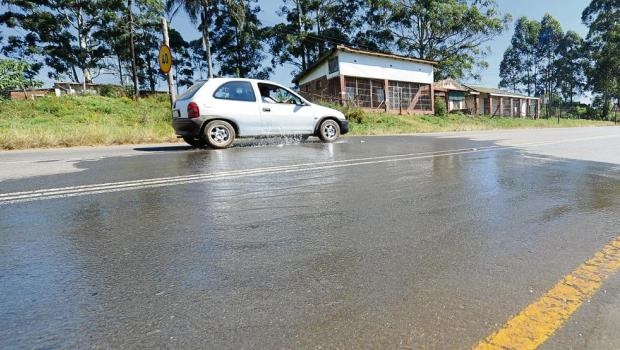 A vehicle drives through a river of water from a burst pipe on Sweetwaters Road.
Ian Carbutt, The Witness

Pietermaritzburg - Umgeni Water is juggling the supply of water in dams in the KZN Midlands to ensure they do not reach dead storage levels.

Spokesperson Shami Harichunder said to stabilise the level of Midmar Dam, water is being transferred from Mearns and Spring Grove dams into ­Lions River, from where it makes its way into Midmar dam.

“Although the level of Spring Grove Dam is high, it must be remembered that this is a small dam, when compared to Midmar, and its water resource depletes quickly as it fills up.”

“The Umgeni system remains of great concern to Umgeni Water. As a result of limited water resources within it, ­Umgeni Water has begun reducing ­potable water production by 10% at its water treatment plants and the ­municipalities that receive water from this system are applying mandatory ­water curtailment of 15%.

“The restrictions in place are ­necessary to ensure that Midmar and ­Albert Fall dams do not reach dead ­storage — a situation that could have dire consequences for business, industry and domestic users of water.

“An estimated four million users/­consumers ultimately receive water from this system. Projections by Umgeni ­Water are that if rains do not materialise and demand continues unchanged, both dams could have reached dead storage by end 2016,” he said.

Harichunder said the levels of all of the major dams within the Umgeni ­Water operational area are still below the levels they had been at a year ago.

Harichunder said the water situation in KZN remains of grave concern due to the protracted drought in the province.

He said the current situation is being “exacerbated” by high temperatures, which cause evaporation of dam surface water.

Rainfall predictions for the next four months, as provided by the Council for Scientific and Industrial Research (CSIR), remain unchanged.

Information released by the CSIR suggests that a below-average rainfall pattern is expected to continue until the end of August 2016.

“This means that the amount of water currently available in dams that are owned or operated by Umgeni Water will have to be carefully managed in ­order to ensure that available water lasts until the next good rains arrive.

“Management of water resources at times of absence of rainfall and simultaneous reduction of dam levels involves the application of cuts in potable water production at water treatment plants and introduction of restrictions by water services authorities [municipalities],” Harichunder said.

We live in a world where facts and fiction get blurred
In times of uncertainty you need journalism you can trust. For only R75 per month, you have access to a world of in-depth analyses, investigative journalism, top opinions and a range of features. Journalism strengthens democracy. Invest in the future today.
Subscribe to News24
Related Links
Hillcrest NPO offers Vryheid oasis
Dry taps could be the norm, warns Msunduzi as reservoirs run low
Water-shedding logic needsa rethink
Next on Witness
Updated | Over 40 people injured in N3 pile-up accident in KZN