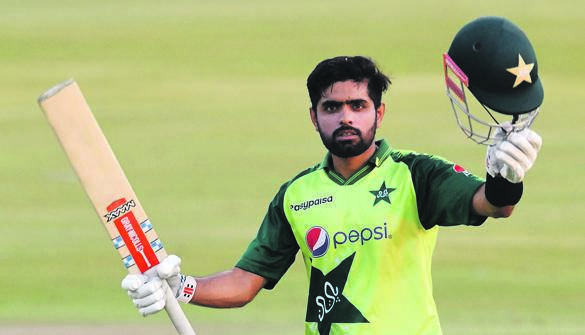 Babar Azam of Pakistan acknowledges his ton during the 3rd KFC T20 against South Africa at SuperSport Park yesterday.

An astonishing century from Babar Azam led Pakistan to a remarkable, record-breaking nine-wicket victory in the third T20 International against South Africa at Supersport Park in Centurion on Wednesday.

Chasing a formidable target of 204 for victory, the tourists galloped home with two overs to spare with Babar making a breathtaking 122 from a mere 59 deliveries with 15 fours and four sixes. His century came from only 51 balls, the fastest for Pakistan.

The opening partnership of 197 was a record for Pakistan and it was also their highest successful run chase in T20 Internationals.

Babar was finally dismissed with just seven runs required for victory when he edged Lizaad Williams to Proteas captain and wicketkeeper, Heinrich Klaasen. The opening partnership with Mohammad Rizwan was worth a numbing 197 in just 17.4 overs, a chastening experience for South Africa’s hapless and helpless attack.

Rizwan went almost unnoticed such was the quality and precision of Babar’s assault but his unbeaten 73 from 47 balls (5x4, 2x6) was an innings of high class – but not nearly as glistening as his captain’s.

Aiden Markram and Janneman Malan both scored half-centuries of their own to power South Africa to what appeared to be a competitive total of 203-5 after being asked to bat first and their opening stand of 108 in under 11 overs appeared to put the hosts in the driving seat.

Markram led the way with 63 from only 31 balls with six fours and four sixes. He was especially severe on the seamers, Hasan Ali’s first over was blasted for 18. It was Markram’s third consecutive 50 in the series following scores of 51 and 54 in the first two games.

Malan’s maiden T20I 50 included five fours and a pair of sixes, one of which was his glorious, trademark drive over extra cover. Both men fell to left-arm spinner Mohammad Nawaz — Markram bowled and Malan top-edging a reverse sweep for 55 from 40 deliveries. George Linde’s promotion to No 3 maintained the frenetic tempo as the left-hander smashed a four and two straight sixes in his 22 from 11 balls before he was bowled off a bottom edged pull by seamer Faheem Ashraf.

ALSO READ | Dolphin’s Dupavillon looks to step up for Proteas against Pakistan.

Captain Heinrich Klaasen also made a brisk start with 15 from 10 balls and Rassie van der Dussen took the Proteas past 200 and onto their highest T20 total against Pakistan with an unbeaten 34 from 20 balls (1x4, 2x6).

Pakistan now take a 2-1 lead into the final match of the series at SuperSport Park on Friday.

We live in a world where facts and fiction get blurred
In times of uncertainty you need journalism you can trust. For only R75 per month, you have access to a world of in-depth analyses, investigative journalism, top opinions and a range of features. Journalism strengthens democracy. Invest in the future today.
Subscribe to News24
Related Links
‘We’ve got this’, says Linde ahead of third T20 International against Pakistan.
Linde, Markram step up as Proteas level T20 International series against Pakistan.
Proteas look to save face in T20 series.
Next on Witness
Cricket SA confirm Proteas men’s tour to the West Indies

Read more on:
pakistanproteasbabar azamgautengcricket
Daily Poll
Former president Jacob Zuma's counsel claims he is ready to plead to the arms deal corruption case against him next week – but he first wants to (again) attempt to get prosecutor Billy Downer removed from the case. What are your thoughts on the matter?
Please select an option Oops! Something went wrong, please try again later.
I think it’s just another delay tactic
88% - 78 votes
It’s not a delay tactic, Zuma just wants a fair trial
9% - 8 votes
I also believe Downer should be removed from the case
3% - 3 votes
Previous Results
Latest Issue