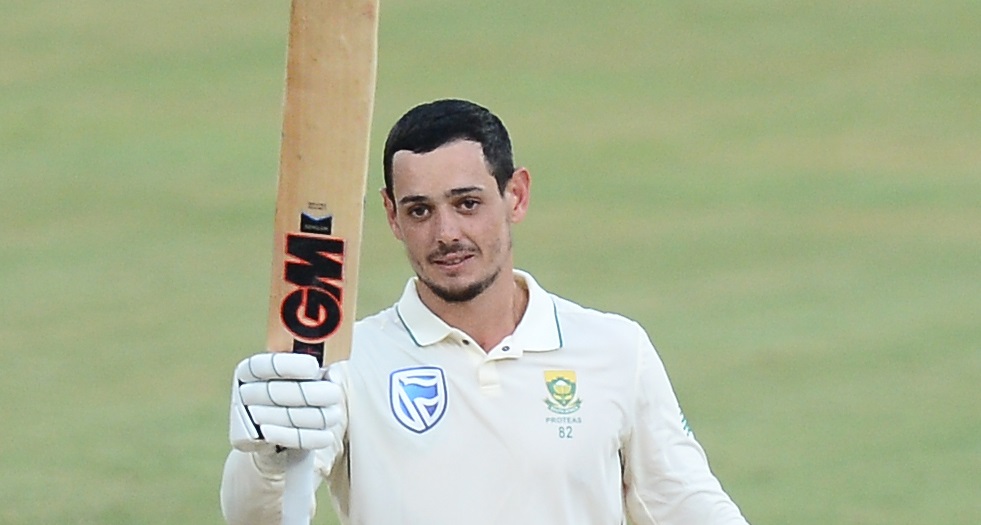 Quinton de Kock smashed his sixth Test century to put South Africa in complete control of the first Test against the West Indies at the Darren Sammy Stadium in Gros Islet, St Lucia as they were bowled out for 322 at tea on the second day on Friday, an overall lead of 225 runs.

De Kock switched through the gears as he feared running out of partners and launched a ferocious assault on the withering West Indies attack cracking 12 fours and seven sixes in his unbeaten 141 not out during a glorious return to form after 22 months since his last century. He faced just 170 balls and struck a dozen fours and seven sixes.

De Kock added an improbable but highly entertaining 79 for the ninth wicket with Anrich Nortje who contributed just seven.

Wiaan Mulder was the first of three wickets to fall in the afternoon session when he edged Jason Holder to ‘keeper Joshua da Silva for 25 (57balls, 4x4) and was quickly followed by Keshav Maharaj (0) who was brilliantly caught off an inside edge by substitute fielder Kieron at short leg off the bowling of offspinner Rakheem Cornwall.

Holder was the best of the home side’s bowlers with 4-75 from his 20.5 overs while 19-year-old fast bowler Jayden Seales, having suffered some brutal treatment from de Kock, had figures of 3-75 from 2.

We live in a world where facts and fiction get blurred
In times of uncertainty you need journalism you can trust. For only R75 per month, you have access to a world of in-depth analyses, investigative journalism, top opinions and a range of features. Journalism strengthens democracy. Invest in the future today.
Subscribe to News24
Related Links
Nortje, Ngidi rip through Windies
Nortje, Ismail bag top awards in virtual ceremony held by Cricket SA
CSA name Proteas tour squads for West Indies, Ireland
Next on Witness
Gutsy Griquas make most of holes in Sharks defence

Read more on:
west indiesproteasquinton de kockst luciacsacricket south africatest seriescricket
Daily Poll
Should employers be allowed to implement and enforce mandatory vaccination policies at the workplace?
Please select an option Oops! Something went wrong, please try again later.
Yes, it helps ensure everyone’s safety
39% - 30 votes
No, no one should be forced to get vaccinated
39% - 30 votes
Depends on the line of work they're in
22% - 17 votes
Previous Results
Latest Issue