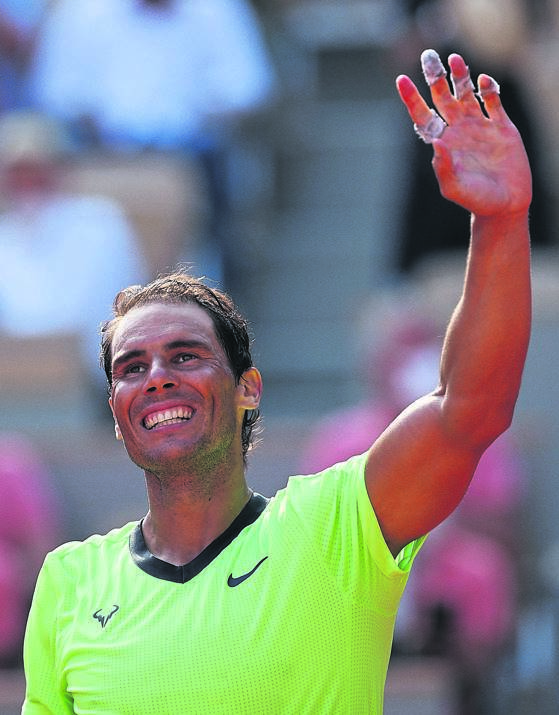 Rafa Nadal survived an early scare from Diego Schwartzman in the quarter-finals of the French Open in Paris on Wednesday, while Maria Sakkari became the first Greek woman to reach a Grand Slam semi-final.

Spanish maestro Nadal dropped a set at Roland Garros for the first time in two years, but roared back to beat 10th seed Schwartzman from Argentina 6-3, 4-6, 6-4, 6-0 for a place in the semi-finals.

Schwartzman ended Nadal’s run of 36 consecutive sets won at Roland Garros, dominating the longer rallies with well-constructed points and the match was evenly poised at 4-4 in the third set when third seed Nadal converted a crucial break point.

“I am speechless. It is a dream coming true. I don’t know, it is a very nice feeling and I could not have done it without my team and their support.”
Tamara Zidansek at the Paris Open.

Schwartzman ran out of energy in the fourth as Nadal dispatched him with a clinical performance, the defending champion sending a flurry of winners past the tiring Argentine.

Nadal, 13-times champion at Roland Garros, will next play the winner of Wednesday’s late match between Novak Djokovic and Matteo Berrettini. Barbora Krejcikova of Czech Republic hits a forehand during her women’s singles quarter-final match against Coco Gauff of the United States at Roland Garros on Wednesday in Paris, France.
Gallo Images Maria Sakkari of Greece returns a ball in her quarter-final match against Iga Swiatek of Poland at the French Open in Paris on Wednesday.
Gallo Images

The world number 18 will face unseeded Barbora Krejcikova of the Czech Republic for a place in the final after seeing off Swiatek who had required a medical timeout early in the second set.

“I am speechless. It is a dream coming true. I don’t know, it is a very nice feeling and I could not have done it without my team and their support,” said the 25-year-old.

“We have a long way to go but we made a huge step today. I enjoyed myself and sat down and said to myself it is an important match but to enjoy it. I had to enjoy it.”

“I’m here and I’m in the semi-finals, and I never really imagined I’d be standing here one day on this court, especially in singles, and being able to win.”
Barbora Krejcikova at the Paris Open.

For only the second time in the Open era, there are four first-time Grand Slam semi-finalists in women’s singles, after the 1978 Australian Open.

Furthermore, for just the fifth time in Roland Garros history, a player seeded outside the top 10 will lift the Coupe Suzanne Lenglen on Saturday.

Sakkari is the second Greek in the semi-finals of the singles at this year’s French Open after Stefanos Tsitsipas made the men’s last four on Tuesday.

Krejcikova, who is also through to the last four of the women’s doubles with Katerina Siniakova, claimed her 10th successive win on the tour having arrived in Paris on the back of a maiden singles title in Strasbourg.

“I’m here and I’m in the semi-finals, and I never really imagined I’d be standing here one day on this court, especially in singles, and being able to win,” said Krejcikova, a 2018 French Open doubles champ.

Krejcikova recovered from a rocky start against Gauff, the youngest Grand Slam quarter-finalist since 2006.

We live in a world where facts and fiction get blurred
In times of uncertainty you need journalism you can trust. For only R75 per month, you have access to a world of in-depth analyses, investigative journalism, top opinions and a range of features. Journalism strengthens democracy. Invest in the future today.
Subscribe to News24
Related Links
Zidansek bursts into French Open semi-finals.
Nadal eases through, Anderson bows out at Roland Garros.
Remarkable comeback win for Andujar at Roland Garros.
Next on Witness
World champ Seewald shows his mettle on Cape Epic’s third stage