Maritzburg United worried about the Lentjies factor at Chippa 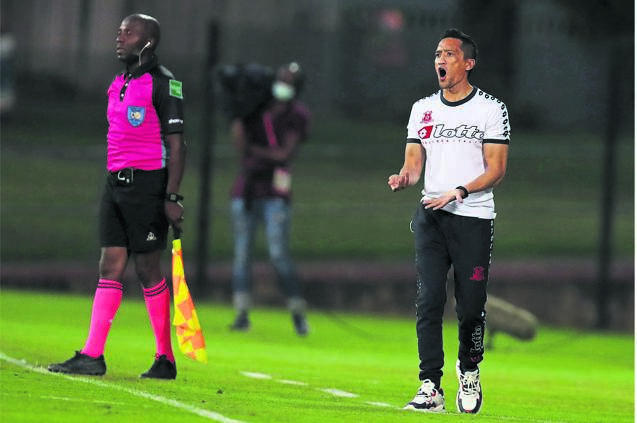 Maritzburg United assistant coach Maahier Davids and his side are looking to return to winning ways against Chippa United on Sunday.

Maritzburg United are worried about the positive influence that their former skipper, Kurt Lentjies, has brought to Chippa United, as the fellow stragglers prepare to lock horns on Sunday.

The Team of Choice will host Chippa in a DStv Premiership clash at Harry Gwala Stadium at 6 pm.

While the 12th-placed Maritzburg will be desperate to end their eight-match winless run, the men from the Eastern Cape are aiming for full points that will give them a chance to move up from position 15 on the Premiership log table.

Support independent journalism
Get 14 days free to read all our investigative and in-depth journalism. Thereafter you will be billed R75 per month. You can cancel anytime and if you cancel within 14 days you won't be billed.
Subscribe
Already a subscriber? Sign in
Next on Witness
High-flying Royal AM poised for second spot as they host Sundowns

Read more on:
chippa unitedmaritzburg unitedpietermaritzburgharry gwala stadiumkwazulu-natalpmbkzndstv premiershipsoccerpsl
Daily Poll
Load shedding is a reality in South Africa with experts saying if the system fails, stage 8 cuts could be on the cards. What do you think can be done to end load shedding?
Please select an option Oops! Something went wrong, please try again later.
We can all try using less electricity
2% - 1 votes
Deal with the rot within Eskom
35% - 23 votes
Find alternative power sources outside Eskom
64% - 42 votes
Previous Results