Brace for severe thunderstorms in these parts of KZN on Saturday, weather office warns 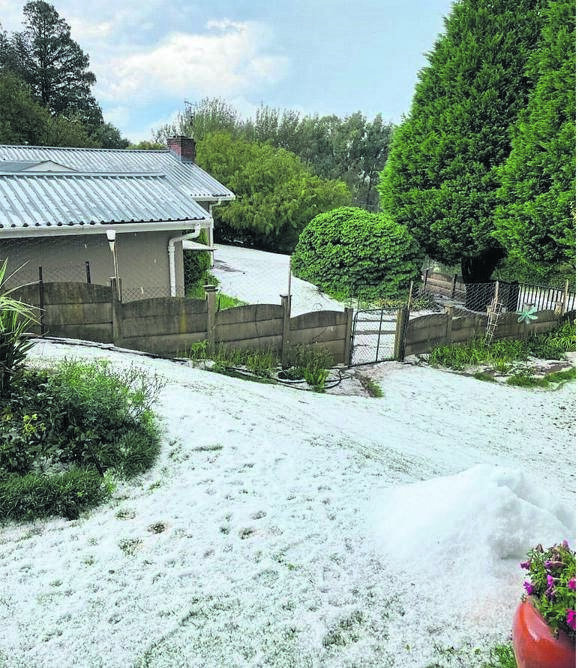 Hail lies in drifts at a home in Mooi River during a recent thunderstorm.

The SA Weather Service (Saws) has warned that parts of KwaZulu-Natal could be affected by severe thunderstorms on Saturday afternoon.

These are the areas that could experience severe thunderstorms:

The impact of these storms could lead to localized damage to infrastructure especially informal settlements and rural areas. Saws also warned of localised flooding of low lying bridges and susceptible roads, poor driving conditions due to slippery roads and poor visibility which may result in minor car accidents, localized damage to infrastructure due to strong winds and hail and lightning which may be a danger to life and live stock.

Advice from weather office:
Stay in doors, if outdoors seek shelter immediately but DO NOT seek shelter under trees, telephone lines and power lines. Take caution or avoid traveling on bridges and road in low lying areas as these may be flooded and there may be sinkholes. Avoid outdoor activities as strong winds and lightning may result in injuries. If possible stay indoors well clear of windows, shelter pets, cover vehicles and disconnect electrical appliances.

We live in a world where facts and fiction get blurred
In times of uncertainty you need journalism you can trust. For only R75 per month, you have access to a world of in-depth analyses, investigative journalism, top opinions and a range of features. Journalism strengthens democracy. Invest in the future today.
Subscribe to News24
Next on Witness
KZN Mercedes Benz driver appears in court for looting

Read more on:
sa weather servicesawsrichmondkwazulu-natalumngeniethekwinikznimpendlepietermaritzburgsevere weather eventtornadostorms
Daily Poll
National Treasury says around R38 billion will be given to businesses and people to help them recover from the recent looting. What are your thoughts on this matter?
Please select an option Oops! Something went wrong, please try again later.
It seems like a good amount
16% - 8 votes
I don’t think it will be enough
31% - 15 votes
I’m not sure yet, we’ll wait and see
53% - 26 votes
Previous Results
Latest Issue