10 Best news photos of the week 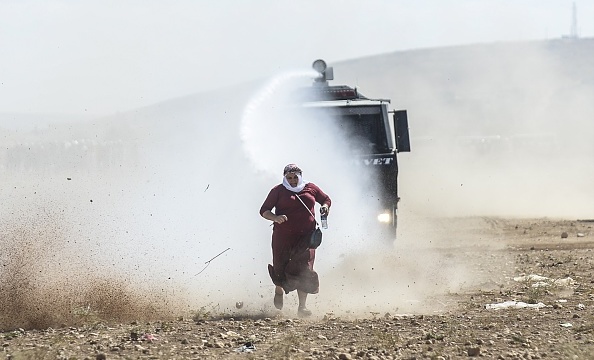 Protesters sleep outside the legislative government complex as the standoff continues on 3 October 2014 in Hong Kong. Thousands of pro democracy supporters continue to occupy the streets surrounding Hong Kong's Financial district. Protesters have threatened to widen their campaign with a new deadline of midnight tonight. They are calling for open elections and the resignation of Hong Kong's Chief Executive Leung Chun-ying.

Ex-Madrid Regional Government President and president of the Popular Party in the region Esperanza Aguirre is hit by a microphone as she arrives at Plaza de Castilla Preliminary Court on 22 September 2014 in Madrid, Spain.

A Kurdish woman runs away from a water cannon during clashes with Turkish soldiers near the Syrian border after Turkish authorities temporarily closed the border, blocking young Syrian Kurds who had accompanied their families to safety inside Turkey from returning to the battlefront, on 22 September 2014 at the southeastern town of Suruc in Sanliurfa province. Turkey said on September 22 that some 130,000 people had flooded across its border from Syria as Kurdish fighters battled Islamic State group jihadists trying to capture a strategic town.

An orangutan mother and her baby look out from their enclosure at the Pata Zoo on 25 September 2014 in Bangkok, Thailand. Located on the 6th and 7th floors of the aging Pata Department Store, the Pata Zoo is being criticized by animal rights activists for having cramped, inadequate facilities. A recent campaign to free Bua Noi, the zoo's only gorilla, has received over 35,000 signatures and the chief of Thailand's Department of National Parks, Wildlife and Plant Conservation has agreed to meet with activists to discuss the matter.

Iranian Naval troops march during the annual military parade marking the anniversary of Iran's war with Iraq (1980-88) in Tehran, on 22 September 2014. Iran is a cornerstone of stability in the Middle East in the face of the 'terrorists' rocking the region, President Hassan Rouhani said before leaving for the United Nations.

Indian man, Ram Singh Chauhan (61) displays his approximately 5 meter long moustache in Ahmedabad on 24 September 2014. Ram Singh Chauhan is to be felicitated by the Gujarat Lok Kala Foundation for having the World's Longest Moustache, a feat which has been recognised by the Guinness Book of World Records.

US President Barack Obama listens to hecklers from the crowd on immigration reform as he delivers remarks during the Congressional Hispanic Caucus Institute's 37th Annual Awards Gala in Washington, DC, 2 October 2014.

US actor George Clooney and British lawyer Amal Alamuddin arrive on 29 September 2014 at the palazzo Ca Farsetti in Venice, for a civil ceremony to officialise their wedding. To see pictures inside their star studded wedding, pick up the 9 October issue of YOU Magazine. On sale now.