A grand master in the making 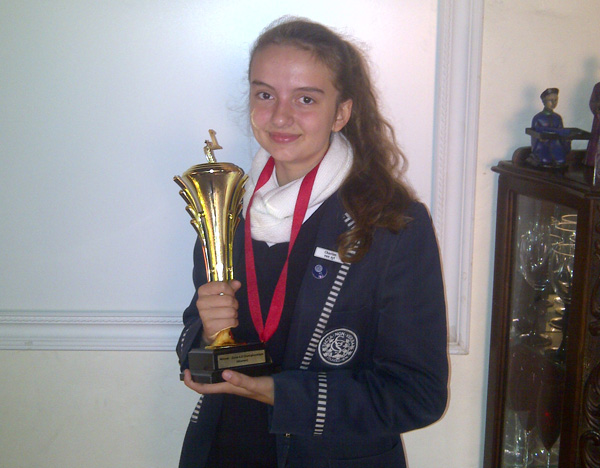 Don’t mess with Charlize van Zyl if there’s a chess board between you. At 13, she’s the youngest South African player ever to reach international chess master level.

She achieved this after her recent victory at the Zone 4.3 Individual Championships in Botswana. Charlize competed against players of all ages from other African countries and finally won the women’s category.

You get points on the world rankings list when you win matches, and after her victory Charlize had enough points to be awarded the international master title. Besides grandmaster, it’s the highest title one can achieve in chess. “I’m very pleased about the new title. But my aim is to one day be a female grandmaster,” she says.

What’s her secret? “I stay calm during a match. Everyone watching your match has a certain idea of what they think your next move should be, and that puts a lot of pressure on you.” But you learn to ignore that, Charlize says. “The more experience you’ve got the less that pressure bothers you.”

It helps that she’s got a very placid personality. “It also helps that I have a long attention span. I’m not at all hyperactive. And because I grew up playing chess, I’m used to long games.” But she’s still tired after a long match, such as one in Botswana that lasted more than five hours.

She believes she inherited her talent form her dad, Marius. He’s manager of the South African chess team and taught her to play. But she’s convinced pure talent is not enough. “’You also need passion. You must love it or there’s no point in playing chess.”

She usually practises three days a week after she’s met her other school commitments, and spends most weekends at tournaments. She’s coached by Argentinian Grandmaster Pablo Lafuente, who’s living in South Africa and gives her lessons twice a week, as well as attending most of her tournaments.

But chess isn’t the only thing that keeps the Grade 8 learner at Collegiate Girls’ High School in Port Elizabeth busy. She also plays hockey, swims and plays the flute.   When she’s not involved in one of her many extramural activities, she does “normal teenage things” such as watching TV and hanging out with her friends. Charlize also loves reading, and her favourite book is The Hunger Games.

She enjoys outmanoeuvring her opponents on the chess board. “People often underestimate me, probably because of my age. But that’s the great thing about chess: don’t underestimate me because there’s a good chance I could beat you.”