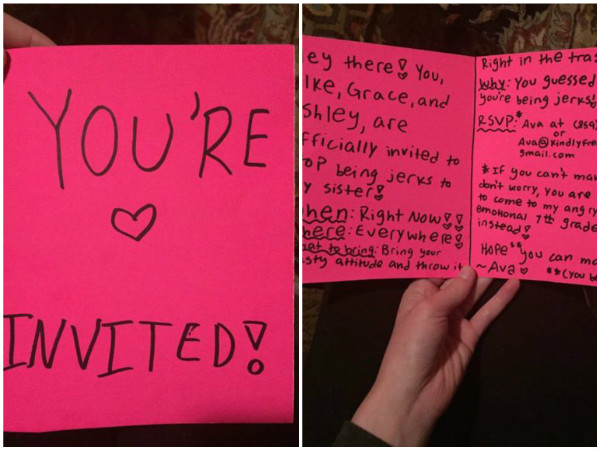 Send your RSVP to Ava@kindlyfreakingstop.gmail.com.

What do you do if you're a 12-year-old girl with a little sister who's constantly being picked on?

If you're this pre-teen, you write a brutal invitation card, of course.

"You're invited!" reads the outside of a handwritten greeting card that recently went viral. "Hey there! You, Elke, Grace, and Ashley are officially invited to stop being jerks to my sister!" The sassy girl even included the time, location and what her guests should bring.

What to bring: Bring your nasty attitude and throw it right in the trash can!"

via GIPHY
Just in case the trio missed it, the older sister reiterated the message in several languages. The hilarious invitation was first shared on Twitter in April by user @daisybhelm.

"I want to send gifts and balloons to this kid's angry wrath party," commented user @docmidnight.

‘I am done with boys!’ Adorably angst-ridden diary of a 7-year-old girl becomes a viral sensation