Accents in the TV world I always end up wondering if it’s easy to switch accents whenever I watch British actor Damian Lewis, who plays the very American Brody in Homeland. It seems to me the actors who aren’t American can switch it on and off so easily – true it takes a lot of practice and working with a dialect coach but it still fascinates me.

I remember reading once that British actor Hugh Laurie, who stars in US medical drama series House, told Access Hollywood that an American accent didn’t come easily. “It’s as if you’re playing left-handed. Or like everyone else is playing with a tennis racket and you have a salmon.” That quote amuses me and seems fitting when you hear people trying to fake American accents.

I ended up thinking about it again and decided to look up more on my phone while watching TV as I eagerly waited to see what Brody and Carrie were up to in season three of Homeland last week.

And it definitely doesn’t sound easy. Most, including Damian Lewis and Charlize Theron, prefer to stay in accent. “When I’m working in America I wake up with an American accent and stay with it all day till make-up comes off,” he told the Telegraph newspaper. “I just want everyone to be at ease, and not have the show’s creators think, ‘Oh! he’s so English, why did we hire him?’”

And after he spoke in his British accent when accepting his Emmy award for outstanding actor in a drama series last year Twitter went mad, with many Americans not realising he wasn’t actually American. “My Brody accent is really a kind of generic American accent that I’ve found I know convinces people I’m American without being particularly from anywhere. In fact, shortly after I did Band of Brothers [the award-winning series about American soldiers during World War 2], someone came up to me and said, ‘Damn, you’re good. You sound totally like an American. I got no f***ing idea where you’re from but it sounds totally American’.” 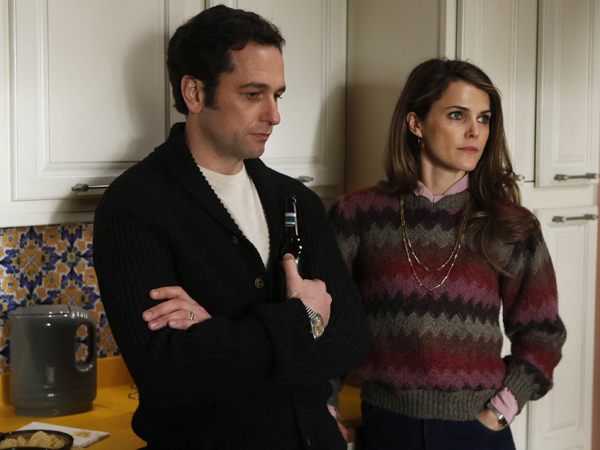 Matthew Rhys and Keri Russell in The Americans

Another actor who I always forget isn’t American is Welshman Matthew Rhys who plays a Russian spy disguised as an American in drama series The Americans. He also used a US accent in his previous series, Brothers & Sisters, (he played Kevin Walker) and told website Wales Online that the trick was to speak more slowly and deeply. “The register seems to be lower over there for some reason.” But he had the occasional slip-up when working on Brothers & Sisters where his own Welsh accent slipped in. “Halfway into a scene the director told the cameraman to cut, looked across at me and said, ‘Let’s go again. And this time, Matthew, could you try not sounding like you’re from Middle Earth’,” he told the website.

He told dailydead.com he’s spending so much time in America it’s more comfortable to stay with the accent rather than switch back to his British one and have little nuances slipping in. “I was called out by my mother-in-law the other day for saying ‘from the get go’ which is really not an English expression.” Simon Baker in The Mentalist

The Mentalist’s Australian star Simon Baker told metro.co.uk he sometimes forgets his US accent when working with an Australian director on the show. “He’s got a very broad accent . . . Then I start talking with a thick Australian accent too, and when he says ‘action’ I forget to be American.” It’s starting to feel like few actors on American TV shows are actually American, as Simon’s co-star Owain Yeoman who plays Wayne Rigsby is from Wales. And Simon is just one of a bunch of Australians working in American TV – Yvonne Strahovski (Hannah in Dexter), Alex O’Loughlin (McGarrett in Hawaii Five-0), Rose Byrne (Ellen in Damages), Poppy Montgomery (Carrie in Unforgettable), Ryan Kwanten (Jason in True Blood), Toni Collette (Ellen in Hostages), Rachel Griffiths (Mac in Camp) and Anna Torv (Olivia in Fringe). The list goes on and on.

Anna – who not only has to master an American accent but also has to play various versions of her character, Olivia – says there are some words she just can’t get right. “‘The word ‘anything’. Whenever I have ‘anything’ in a script I see if I can change it to ‘something’ or ‘a lot of things’,” she told her fan site, annatorv.com.

I was almost tempted to rewind through the past few episodes to see if I could spot her saying ‘anything’. Interestingly she also told her fan site she thought a South African accent is one of the hardest to do and that Leonardo DiCaprio did a good job in the movie Blood Diamond (2006). Well, that could be debated by many South Africans, I suspect.