When Chad Le Clos beat out uber-Olympian Micheal Phelps to take gold in the 200m butterfly in London four years ago, it was the upset of the 2012 Olympics.

Who can forget that moment Chad struggled to fight back the tears while listening to the national anthem blaring throughout the stadium as he revelled in glory? So when Phelps, who was due to retire after the London Games but subsequently changed his mind (something to do with the lost gold, perhaps?) was due to take on SA star Chad in the same race in this year's games, SA-American swimming fan rivalry reached fever pitch. Adding fuel to the proverbial fire was the viral 'Micheal Phelps death stare' in which the long-time Olympian appeared to be staring daggers at our boy before the 200m butterfly semi-final. According to (most US)reports Chad had been taunting his rival during the warm up in "preening in front of Phelps, shadowboxing and dancing around, clearly thinking he was getting in Phelps head," as Fox Sports put it.

But come D-Day on Tuesday, Phelps reclaimed that gold he missed out on four years ago. South Africans woke to the news that not only had Chad not won gold, but had failed to get onto the podium at all being left to contend with a fourth place finish.

And so the glory went to Michael Phelps, and deservedly so. Phelps is cited as the most decorated Olympian of all time and holds the record for the most Olympic gold medals -- 21.

That's more than twice that of the second highest record holders. Twitter exploded with people acknowledging Phelp's greatness: "Michael Phelps is not human," one fan tweeted, while another put things into perspective with the joke "Michael Phelp's gold medal count can now legally drink!"

Another troll took the conversation to Chad's Wikipedia page, where he edited the swimming star's his personal bio to read:

"He died by the hands of Michael Phelps, being literally blown out of the water by the greatest American since Abraham Lincoln." 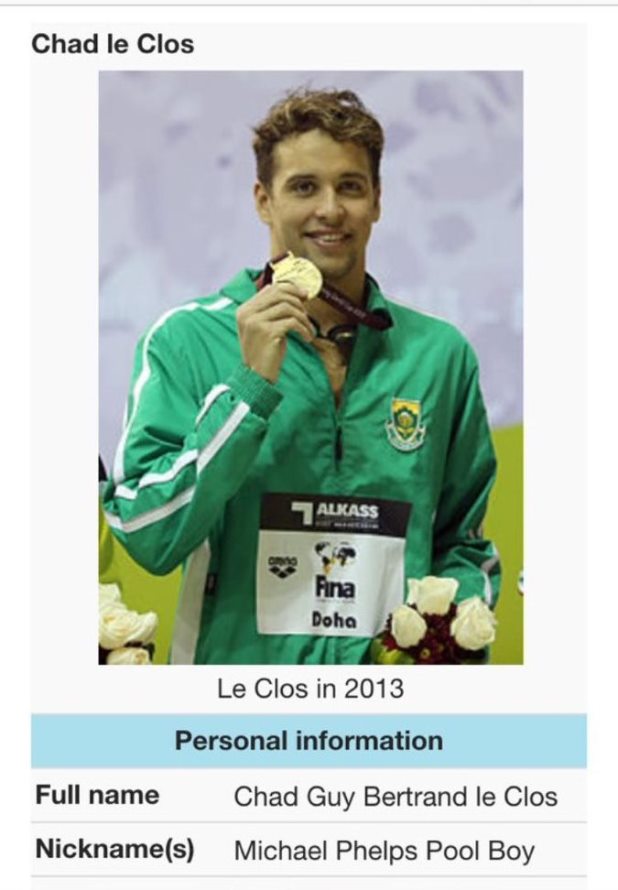 Let's check in with Chad Le Clos, I believe senior swimming analyst DJ Khaled has some words of recognition for him: pic.twitter.com/wB2dnbVumu — Adam Jacobi (@Adam_Jacobi) August 10, 2016

You win some and then you lose some, right? Chin up, Chad. South Africans will always have your back.

Heartbroken for @chadleclos! It takes a lot of guts to even compete with so much happening in your life like that. Team #RSA ? — IG & SC: @roxyburger (@roxyburger) August 10, 2016

SMH, 'Mericans messing with @chadleclos's wiki page. But is all good. Y'all about to BE the joke. Trump's about to become your leader. — Tumi Tladi (@MsTumelo) August 10, 2016

Your guide to the Rio Olympics: These are the events you can’t afford to miss