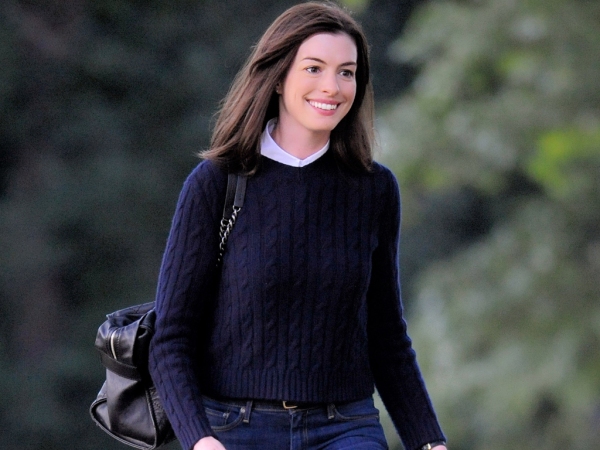 Anne Hathaway felt "stressed out" when she first became famous.

The 31-year-old actress' first major film role was in 2001's The Princess Diaries and since then she has gone from strength to strength, winning countless awards for playing Fantine in the film adaptation of Les Misérables. She appears to have adapted to being in the limelight now, but Anne admits it was difficult to come to terms with at the beginning. “This fame thing? F**ked me up for a really long time," she revealed to the November issue of Britain's Elle magazine. "I didn’t know how to do it; I didn’t know how to engage with it; it stressed me out. And people would say, 'You just have to be yourself,' and I was like, 'But I don’t know who that is yet!'”

‘This fame thing? F**ked me up for a really long time’

Anne has grown in confidence over the years and her bubbly personality even landed her the job of hosting the Oscars in 2011 alongside James Franco. Now all the star focuses on is feeling comfortable in herself rather than trying to make a good impression on others.

“I’ve realised that I don’t need validation from anybody. At all. I’m not sitting here now worrying, 'What do you think of me?'" she explained. "With all due respect, you [the journalist] seem like a lovely lady, but I don’t need you, or anyone else, to like me. And that’s so liberating. It’s a big reveal, man.”

Another reason why Anne may feel more settled is because of her husband Adam Shulman. The pair tied the knot in 2012 at California's Big Sur and are often spotted looking cozy while out and about walking their dogs.

Again, Anne felt anxious at the start of her marriage, but all doubts have gone now.

“The first year of my marriage was insane. So much happened so fast, and we didn’t get to focus on just being married until about a year in. So now, it’s just about letting myself feel safe," she added. "There was a part of me that I was keeping in reserve, and when I got married, something shifted... That question of, 'How long’s this gonna last?' is off the table. And when you’re not worried about that, there’s space to just be silly.”