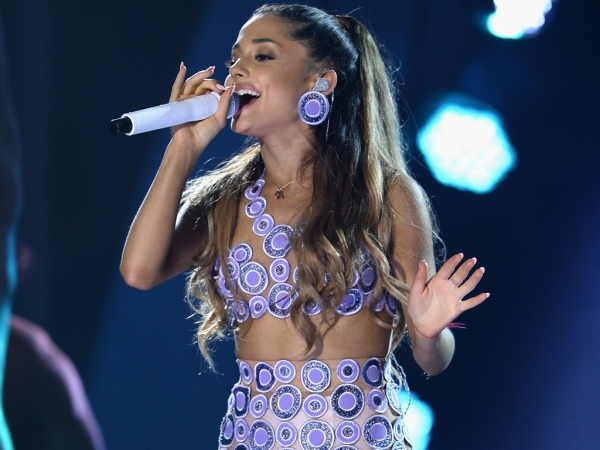 Ariana Grande felt as if she were “dying” at the MTV VMAs. The 21-year-old singer earned an award in the Best Pop Video category at the star-studded ceremony, which took place in Los Angeles last Sunday. And when she learned actor Jim Carrey was presenting her with the trophy, Ariana says she nearly died.

'I was having a heart attack because I didn't know - I didn't expect to get an award, let alone Jim Carrey be the one to give me my award'

"It was crazy because right before I won my award I went over to Miley [Cyrus] and I was like, 'That's Jim Carrey, like standing right over there.' And she was like, 'Oh, you have to go meet him.' And so as soon as I won I was having a heart attack because I didn't know - I didn't expect to get an award, let alone Jim Carrey be the one to give me my award. And [his co-presenter Jeff Daniels] of course," Ariana told Access Hollywood. "I was dying. That was the greatest situation. Couldn't have happened any better."

Ariana’s second studio album, My Everything, was released worldwide on August 25.

Her first single from the offering, Problem, which also features Australian rapper Iggy Azalea, debuted at number three on the Billboard Hot 100 charts and has gone platinum.

Ariana is elated her new music has been so successful because she put her all into the LP.

"It feels amazing," she gushed. "I put a lot of work into the album, so, first of all, I'm just excited that it's out. Second of all, it's number one, which is amazing, and I'm just excited to see that so many people are enjoying it. That like, is the best, most rewarding feeling."