Braaight future comes to an end 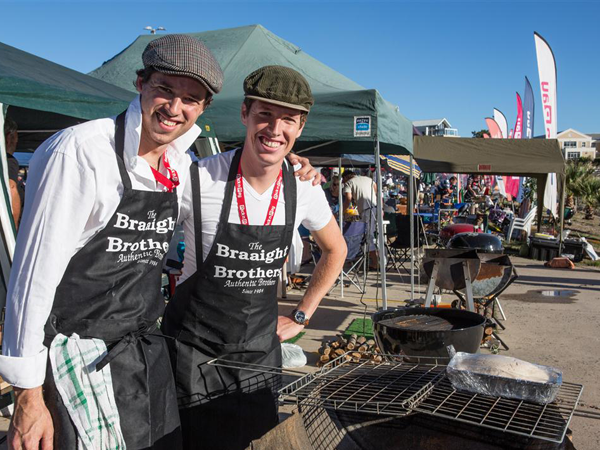 Brothers Tomas (31) and Daniel (28) Cunnama from Cape Town decided The Ultimate Braai Master competition was a once-in-a-lifetime opportunity, so naturally they gave it their best at the auditions – and it paid off. But last night their dreams were shattered when they were eliminated in episode three of this prime-time reality cooking show on SABC3.

During their last challenge Tomas and Daniel, who formed the team The Braaight Brothers, camped overnight on the banks of Lake Jozini, also known as Pongolapoort Lake, in KwaZulu-Natal. The next morning they were required to cook a breakfast on nothing but a spade and a pit fire – and they didn’t impress the judges.

“We made a few mistakes which saw us get into an elimination challenge, but then overthought and overcomplicated a simple breakfast,” explains Tomas. “We were very disappointed to go home so soon. We had a lot more to give and had hoped to be serious contenders for the title of Ultimate Braai Master. But we can be proud of what we achieved.”

Driving down Main Road in Fish Hoek you’ll find Betty’s Coffee Shop on Town Square where Tomas is “owner, manager and chef”.  Daniel graduated with his PhD in astrophysics from the University of the Western Cape on 18 September – the same day as his Ultimate Braai Master TV debut.

The brothers just love braaiing, because “it is the most pure form of cooking – and you get to do it outside”, says Tomas. “We live in a beautiful country with stunning weather; why would you want to cook in a kitchen? Get outside and braai!”

We asked The Braaight Brothers (TBB) a few questions:

Q: Why did you enter?

TBB: For the adventure of a lifetime. Although short, we had an amazing time!

Q: What was your most memorable moment in the series?

TBB: The Sodwana reward of snorkelling on a reef.

Q: And the funniest?

TBB: Any moment shared with the Huiskombuis Boys.

TBB: Catching a tuna off a small boat in a big sea!

Q: In which way did The Ultimate Braai Master change your life?

TBB: It taught us that nothing is impossible in life – or on a braai!

Q: During filming you visited some of South Africa’s most pristine outdoor environments. Tell us about them.

TBB: Hluhluwe Game Reserve is definitely our favourite. Game reserves are an amazing place where one can experience and appreciate this beautiful country.

Q: What is your favourite meat to braai?

Q: And your team mantra?

TBB: Why fly when you can braai?